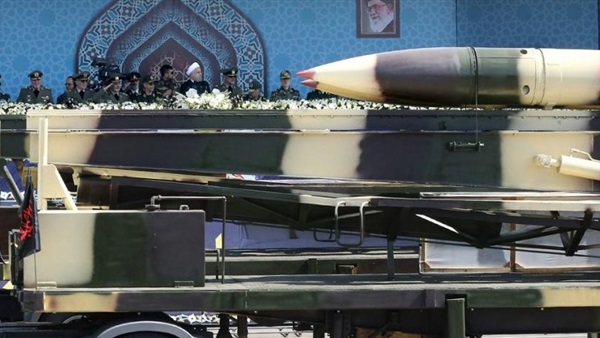 Iran is in a state of anticipation pending the lifting of the arms embargo against it, as Tehran announced that it has the right to export and buy conventional weapons without permission starting October 18, despite the US administration’s decision to re-ban Iran's arming, considering that the US President Donald Trump’s administration, which imposes a ban on Iranian banks, is nothing but a theatrical performance and psychological warfare.

Both Russia and China are looking forward to this date in order to consolidate their close military alliances with Iran and to push advanced weapons to the country, which will then be available to terrorist groups loyal to Iran, including Hezbollah in Lebanon.

Tehran signed the nuclear agreement with major world powers in Vienna in 2015, but the Trump administration unilaterally withdrew in 2018. The Iranian Foreign Ministry considered this a date for its historic victory over the United States, which did not succeed in implementing its agenda and continuing to impose sanctions individually outside the international community, after the UN Security Council rejected an American proposal to extend the weapons embargo on Tehran to be the last step in the policy of maximum pressure on Iran.

Washington has announced its policy in dealing with sanctions against Iran after the signatories to the nuclear agreement announced their commitment to the clause of lifting sanctions as proof of their adherence to the agreement and dropping Washington’s attempt within the Security Council to extend the sanctions. The US Treasury Department announced the imposition of additional sanctions on some major banks in Iran on an individual basis, telling the world they can either deal with it or with Iran.

Iranian Foreign Ministry spokesman Saeed Khatibzadeh commented during a press conference on this step, “We used to say that the Americans are addicted to sanctions, but now they have reached a stage of madness. We do not rule out that they impose sanctions even on things that cannot be imagined. Washington resorts to the insane use of sanctions against everyone who is not subject to them, while such sanctions push many countries to search for alternatives to the US dollar.”

The US sanctions on Iran have caused major economic crises after its withdrawal from the agreement, which caused a significant decline in the value of the Iranian rial against the dollar. Iranian Supreme Leader Ali Khamenei described the new sanctions as a crime in every sense of the word, saying, “The American president expresses his joy in imposing the ban and the maximum amount of economic pressure. No one can boast of committing a crime against a people other than the depraved like you.”

The US administration showed its indifference to the Iranian opposition and the nuclear deal group. Former US Envoy Brian Hook confirmed this by saying that his country will move to restore international sanctions as before the nuclear agreement through the trigger mechanism, which gives the United States the right to activate sanctions in if it considers that Tehran has violated its obligations.

With the Americans having failed to extend the arms embargo on Iran for months in light of the rejection of the vast majority of the Security Council and despite the international resolution in the Security Council that thwarted the American effort, Iran announced in mid-September that there are 1,044 centrifuges currently working on uranium enrichment at the Fordow site.

In the context of these developments, information indicated that the Russian company Rosoboronexport is in its final stages of contracting with Iran to complete a large defense and offensive arms deal, which will include advanced aircraft and S-400 systems. This is in contradiction to Security Council Resolution 2231, which provides for the prohibition of selling offensive weapons to Iran without prior approval from the Council.

Muhammad Abadi, an expert on Iranian affairs, told the Reference that Iran has been relying on a strategic solution of two issues for a long time. The first is missiles. If the United States wants a war against Iran, it has the ability to turn the Middle East into a mass of fire through the long-range missiles it has been investing in for decades. The second thing is that Iran has relied on a number of militias in Iraq, Lebanon, Yemen and Syria; if war were launched against them, it could ignite these areas as well.

Abadi added that if Iran wants to make reasonable use of weapons after October 18, then it has a long time to be able to obtain advanced weapons and even bypass these companies and countries that have pending files with the United States.

Then Iran may not count very much on the weapons it would import from Russia and China if it could, but its constant equation in the Middle East is its long-range missiles and affiliated militias.