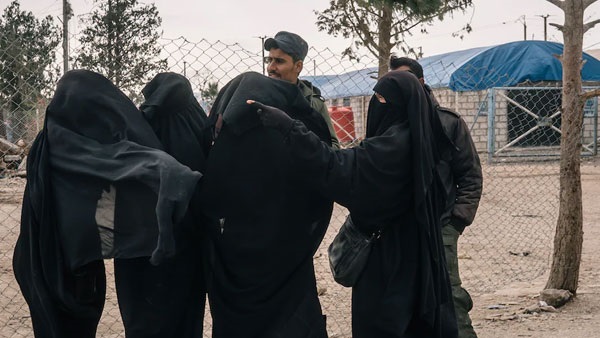 Authorities in northeastern Syria said Monday that they were preparing to release thousands of Syrian families from a detention camp holding civilians displaced during the final battle to defeat the Islamic State's self-proclaimed caliphate.

Conditions inside al-Hol displacement camp, a sprawl of tents perched in the desert west of Hasakah city, have alarmed humanitarian groups and in some cases aided the radicalization of women and children who spent years under Islamic State rule.

Health-care services for the roughly 65,000 camp residents are almost nonexistent, and children who began their education inside the group’s caliphate often have little to no access to schooling. Sewage leaks into tents, and wild dogs prowl the perimeter for food.

“A decision will be issued to empty the Syrians from the camp completely,” said Ilham Ahmed, president of the Kurdish-dominated Syrian Democratic Council’s Executive Committee, which is responsible for governing the area. She made the announcement in a video shared on the body’s Twitter page.

“Those who remain in the camp will not be the responsibility of the Self-Administration,” Ahmed said, referring to an autonomous region in northeastern Syria. It was not clear what this would mean in practice. The announcement did not refer to the network of prisons holding some 10,000 male detainees, several thousand of them foreigners.

Al-Hol’s population swelled drastically at the beginning of 2019 as a joint Kurdish and Arab force, known as the Syrian Democratic Forces, fought a final battle to reclaim territory from Islamic State militants, backed by coalition air power.

Thousands of women and children were trucked to the camp nightly, often in pitiful condition and sometimes shell-shocked. As the chaos subsided and camp authorities surveyed the challenge ahead of them, they separated non-Iraqi foreigners — among them, the camp’s most radical elements — from the rest, and locked them in an annex with chain-link fencing.

There was also no immediate clarity about whether Monday’s announcement marked a new approach to Syrian residents on the part of the administration, or simply an acceleration of ongoing efforts to release Syrian inhabitants under a program in which families vouch for them from outside the facility.

A boy plays with a toy gun made out of cut pipes and tape in the foreigners' section of al-Hol camp in Syria on July 31, 2019. (Alice Martins for The Washington Post)

The move appeared to be a response to local pressure, at least in part. The detention of so many Syrians in the tightly guarded camp has stoked resentment among local Arab communities against the Kurdish-led force.

But Kurdish residents have also voiced frustration that the local administration is paying to support people who lived inside the caliphate, while thousands of people displaced by it are still suffering.

The Self-Administration has repeatedly emphasized that it has neither the means nor the desire to secure camps such as al-Hol, and has urged governments in neighboring Iraq and across the West to repatriate their citizens.

Ahmed described the camp as a “heavy burden on the shoulders” of the administration.

For the most part, the United States has opted to bring its citizens home. But countries such as Britain and France have dragged their feet, repatriating only a small number of orphans.

A year and a half after Kurdish-dominated forces spearheaded the defeat of the Islamic State in Syria, losing thousands of soldiers in the process, they are now charged with handling security around the camps and prisons holding the tens of thousands of men, women and children who streamed out in surrender.

Attempted jailbreaks are increasingly common, sparking concerns for security in the area. Smugglers are also spiriting an increasing number of women and children away from al-Hol and northwest toward rebel-held territory. Some are believed to be escaping to Turkey, prompting concerns that they might seek to return to their home countries without the knowledge of law enforcement.

Dareen Khalifa, a senior analyst with the International Crisis Group, said that a more pressing concern for the women was avoiding rejection and destitution.

“The people who have been released are struggling to reintegrate, and the economic situation outside is already very bad,” she said. Frequently, and quickly, she added, they become the “poorest of the poor.”