The UAE extends a helping hand to Sudan 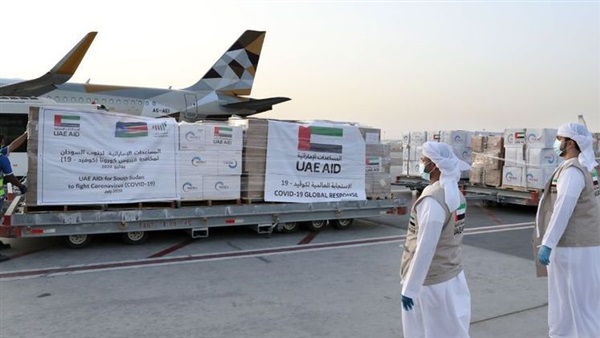 The UAE is striving to provide humanitarian services to Sudan to provide relief to Sudanese citizens who have been affected by the floods.

It intensified its relief and humanitarian efforts to assist Sudan, in light of the emergency conditions that it is witnessing due to the floods that struck the country and claimed more than a hundred lives, in addition to more than half a million Sudanese being affected.

Since the beginning of the crisis, the UAE has provided urgent aid to Sudan, and recently a second Emirati aid plane arrived in Khartoum, within the Emirates Red Crescent’s air bridge, to relief those affected by floods in Sudan, as part of the current UAE humanitarian aid program, to ward off the effects of floods and floods in a number of Sudanese states.

According to media reports, the humanitarian aid convoys run by the UAE to Sudan have positively affected the lives of hundreds of thousands of local residents and contributed to alleviating their daily suffering, especially after the floods washed away a large part of their homes.

Sheikh Mohammed bin Rashid Al Maktoum, Vice President and Prime Minister and Ruler of Dubai, directed to send a plane carrying 100 tons of relief supplies from the warehouses of the United Nations High Commissioner for Refugees in the International Humanitarian City in Dubai, to help the flood victims.

Al Nahyan, Crown Prince of Abu Dhabi and Deputy Supreme Commander of the Armed Forces, in a tweet via his Twitter account, affirmed the UAE's solidarity with brotherly Sudan to overcome its ordeal, following the torrents and floods that swept it, expressing sincere condolences and sympathy to the families of the victims, and wishing a speedy recovery for the injured and safety for the Sudanese people. Brother from all harm.

With his directives and the follow-up of Sheikh Hamdan bin Zayed Al Nahyan, the Ruler's Representative in the Al Dhafra Region and Chairman of the Emirates Red Crescent Authority, the Authority conducted a relief plane to Sudan, to provide urgent and necessary humanitarian needs, to support those affected by the torrents and floods in a number of Sudanese states.

The plane was accompanied by a delegation from the Red Crescent Authority, to deliver relief materials that include large quantities of medical supplies, food and shelter materials, such as tents, blankets and tarpaulins, as well as sanitary materials used in environmental sanitation, and the delegation performs a number of humanitarian tasks during its presence in Sudan, where it stands On the ground, on the devastating effects of the floods and their impact on hundreds of thousands of Sudanese in 16 states, the other most important needs that the Sudanese arena need in the next phase of aid is closely touched in preparation for providing them as part of the humanitarian organization’s program for the benefit of the affected.

Last Sunday, the UAE sent a second aid plane, within the Red Crescent Air Bridge, to relief those affected by the floods, carrying large quantities of medicines, medical supplies, food, and shelter.

About 10,000 people benefit from the aid donated by Sheikh Humaid bin Rashid Al Nuaimi, Member of the Supreme Council and Ruler of Ajman, to support those affected.

The organization undertook the implementation of the donation within its relief program currently directed to the affected people in a number of Sudanese states most affected by the repercussions of the disaster, and proceeded to provide humanitarian needs that include food, medical, housing and other necessary supplies from the local markets inside Sudan, through its delegation currently present on the Sudanese arena to lead operations Relief Authority.

The delegation developed a plan to distribute the donation to the affected people in a number of the most affected states, and worked to expand the umbrella of its beneficiaries.

The Dar Al-Bar Association launched an urgent humanitarian campaign to relief and support Sudan and provide for the needs of its people in light of what is currently being faced.

The relief campaign is working to provide tents, blankets, clothes and food for the afflicted people, in addition to medicines and medical materials to cope with diseases associated with floods such as malaria, and it will also send field medical teams from the UAE and virtual ones through modern technologies, so that the field teams provide remote medical support and equip a field medical hospital And mobile clinics that provide all primary medical services under the supervision of Emirati medical teams, in cooperation with health and humanitarian institutions in Sudan.

It is worth noting that, last April, the UAE sent an aid plane with 7 tons of medical supplies to Sudan, in support of it to limit the spread of the new Corona virus "Covid-19", as more than 7 thousand workers in the field of Emirati medical assistance benefited from Healthcare in Sudan to enhance their efforts in containing the spread of the virus.