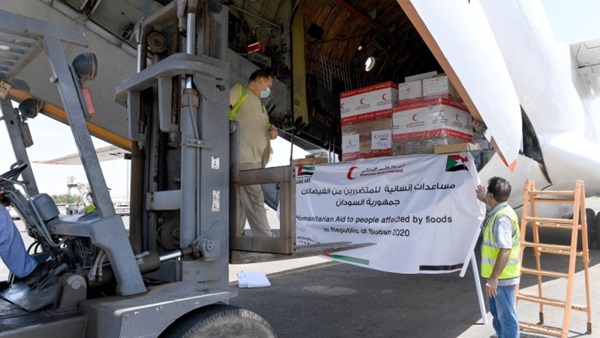 A second Emirati aid aircraft arrived in Khartoum on Saturday as part of the Emirates Red Crescent air bridge under the current UAE humanitarian aid programme, with relief for those affected by the floods in Sudan.

The plane carried large quantities of medicines, medical and food supplies, and shelter materials, and was received at Khartoum Airport by the Advisor at the UAE Embassy in Sudan, Fadel Al Shamsi, and the ERC delegation, which was headed by Mohammad Salem Al Junaibi, who is currently in Sudan to lead relief operations and oversee the delivery of aid to those in need in several states most affected by the floods.

Dr Mohammed Atiq Al Falahi, ERC Secretary-General, stated that the aid, which has been sent at the directives of His Highness Sheikh Mohamed bin Zayed Al Nahyan, Crown Prince of Abu Dhabi and Deputy Supreme Commander of the UAE Armed Forces, and the follow-up of Sheikh Hamdan bin Zayed Al Nahyan, the Ruler's Representative in the Al Dhafra Region and ERC Chairman, supports the Sudanese people, alleviates their suffering, and enhances their ability to overcome the current disaster.

Al Falahi stressed that the UAE is making great efforts to help Sudan overcome the repercussions of this disaster and work with partners to limit the health, environmental, and psychological effects of the floods, indicating that the ERC delegation, which is currently in the Sudanese capital, Khartoum, plays a major role in helping those affected and providing for their basic needs.

The ERC delegation is working in coordination with the UAE Embassy in Khartoum to strengthen the country's humanitarian response towards those affected," he added.

Hamad Mohammed Al Junaibi, UAE Ambassador to Sudan, affirmed that the leadership and people of the UAE stand with their brothers in Sudan in all circumstances, adding that their humanitarian and development presence in Sudan is not new, but has been active for decades and is not linked to a disaster or crisis.

"This aid provided by the Emirates Red Crescent to the Sudanese people is part of the Emirati humanitarian response to support those affected and ward off the dangers facing them. This is the second shipment of aid by the ERC after the first one that arrived in Khartoum on Tuesday," he added.