Five Dead in Colombia Protests Against Police Killing of Man 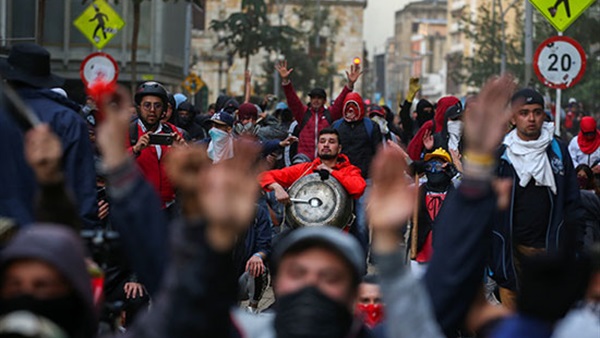 Five people have died in protests and riots that broke out in Bogota following the death of a man who was repeatedly tasered by police, authorities said Thursday.

Demonstrators took to the streets of the Colombian capital on Wednesday after video emerged of Javier Ordonez pleading with uniformed officers, who shocked him with the weapon at least five times as he lay on the ground.

Defense Minister Carlos Holmes Trujillo offered a reward for "the capture of the perpetrators of the murder of five people" during the unrest in Bogota and the neighboring municipality of Soacha.

The minister said he would bolster law enforcement in the capital city of more than seven million by sending in hundreds of soldiers and military police officers.

Bogota authorities said 46 police posts were destroyed during the violence, as well as dozens of public buses.

Ordonez, a 46-year-old father of two, is heard repeatedly crying "please, no more" in the widely circulated footage of his arrest.

He was taken to a police station and transferred to a local medical facility but died soon afterward.

"We express our sorrow for the death of Javier Ordonez and offer our solidarity with his family," Trujillo said.

"The national government will continue to cooperate with the authorities so that the facts are established as soon as possible."

For many Colombians, the case evoked the killing in the US in May of African American George Floyd, also 46, who suffocated after being pinned by the neck to the pavement under the knee of a white officer.

Floyd's plea that "I can't breathe" has become emblematic of police brutality toward black Americans, burnished on banners and T-shirts at protests that continue to roil the US.