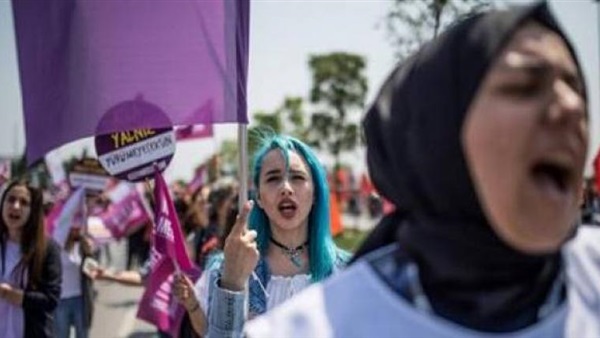 The first part of this series “Enemy of women” dealt with the despicability of the Turkish regime, its hostility to women, and its continuous attempts to suppress them in prisons and taking them as hostages to force their families to surrender. This often amounts to rape, without the regime moving a finger to protect the half of the society responsible for raising future generations, which reveals the narrow-mindedness of the ruling regime that is leading its country towards abyss. United Nations statistics have confirmed that nearly half of Turkey's women are subjected to physical violence.

The Turkish regime abused the breadth of Turkish women, especially those who support the Hizmet movement. Women who talk about the Turkish government's transgressions are subjected to threats, intimidation, persecution and imprisonment. Women human rights defenders and women's rights activists, journalists and other activists continue to face blatant challenges by the government.

This was confirmed by three accused of trying to rape six teachers in the city of Izmir, saying that they wanted to force the teachers to leave the city because they believed that the victims were connected to the Hizmet movement. However, no legal action was taken against the perpetrators, opening the door to systematic repetition of this crime. Days ago, a Turkish court in the southeastern Batman region released Musa Orhan, an officer accused of rape, just a week after his arrest.

The court did not even take into account the suicide of the 18-year-old victim after the accused officer raped her, releasing him despite his confession to the crime. He said that he was drunk during the incident, after being confronted with the forensic report, which refuted his lies and showed that the victim was raped. The Turkish Interior Ministry issued a statement regarding Orhan's release, saying that a legal investigation is underway in accordance with the law, warning that it would take legal measures against media that were “looking to politicize the case” and talking about “the erosion of the justice system and the country's institutions.”

Erdogan succeeded in taking control of the judiciary following the failed coup in 2016. This has resulted in the exacerbation of women's crises and an increase in violence against them. This year witnessed the killing roughly 150 women so far, while 500 women were killed in 2019, according to the organization "We will stop the assassinations of women."

Official reports confirm that Turkish women are subjected to discrimination within Turkish society. During February 2018, 48 women were killed by men, while, according to another report, about 2,000 Turkish women were killed in just eight years. These numbers represent only the official cases that were monitored and reported, although the actual number is expected to be much higher.

The Justice and Development Party (AKP) has committed the lion’s share of incidents of violence against women. For example, former Bursa Governor Nihat Canpolat abused his authority by hitting an employee. A comprehensive report was prepared by Ministry of Interior chief inspectors Sadik Altinkaynak and Şükrü Yıldız, who documented the abuse with medical reports, phone records, and the testimonies of the victim and witnesses.

The investigation began after the victim, Meltem Özkalfa, filed a complaint of abuse and beatings that occurred between 2005 and 2007. She explained how she had been repeatedly beaten by the governor and received threats and intimidation by his bodyguards when she wanted to file a complaint.

It is noteworthy that the Ministry of Interior inspectors were later subjected to criminal charges of belonging to Fethullah Gulen’s Hizmet movement, which the Turkish president accused of trying to orchestrate the alleged coup in 2016.

Altinkaynak was removed from his position as head of the inspection unit at the Ministry of Interior, and he was tried in a criminal case for a period of four years in Izmir on trumped-up charges brought by government prosecutors.

The systematic violence against women in Turkey translates into the ruling AKP deciding to withdraw from the International Istanbul Convention to Combat Violence against Women. This comes in line with statements by Erdogan, who has asserted that gender equality is “against human nature.” At the same time, many religious groups in Turkey have also stepped up their attacks against the treaty, saying that it encourages divorce and undermines morals.

The Turkish newspaper Evrensel reported that recorded violence against women and children reached its highest levels in 2018, as Ankara topped the list of countries around the world with the most incidents of rape against children and women.