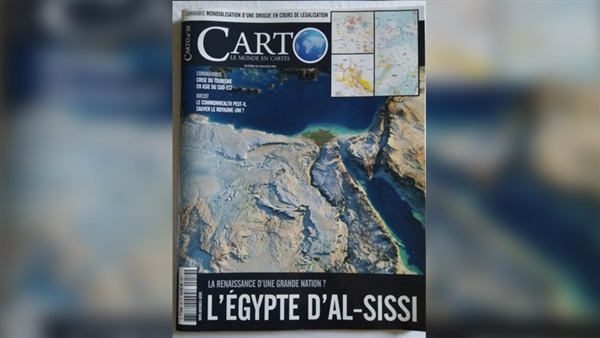 PARIS – The recent publication by the French magazine, Carto, Le Monde en Cartes, which is specialized in geopolitical research, of a satellite image of Egypt on its front page was a strange matter indeed.

This is particularly so because the summer vacation and the coronavirus outbreak made French readers less interested in reading about politics.

Under the satellite image, the magazine wrote the subhead: "Renaissance of a Great Nation".

The magazine, which has just celebrated the tenth anniversary of its founding, wanted to hit two birds with one stone.

It wanted to refer to Turkey's naval harassment of Eastern Mediterranean states, especially Greece and Egypt, and also to the Grand Egyptian Museum project in Egypt.

A large number of French citizens are keeping their eyes on the project. The French consider themselves the founding fathers of Egyptology since French scholar Jean-François Champollion succeeded in deciphering the ancient Egyptian language.

Carto, Le Monde en Cartes specified space to all aspects of the renaissance incumbent Egyptian President Abdel Fattah al-Sisi is trying to make in his country. It referred to the work he does in the economy, the construction of new tourist cities and his achievements in the field of foreign policy.

The magazine described Cairo as the center of the Arab world. It said the Egyptian capital prepares to become a modern integrated city that is open to the world.

It said Egypt's enormous wealth can push it forward and that the current Egyptian leadership deals practically with this matter.

Egypt and France agree on a large number of files, especially on Libya, the fight against terrorism and economic cooperation.

Cooperation between Cairo and Paris is unprecedented, having been launched by the late Egyptian president Hosni Mubarak and the late French president Jacques Chirac.

The presence of a public opinion in France that understands internal developments in Egypt, thanks to serious think tank, Middle East Center for Studies in Paris (CEMO), which is headed by Egyptian lawmaker and renowned thinker Abdel Rahim Ali, for three years now, has played a main role in this.

The presence of the center in Paris coincided with the rise to power in France by incumbent President Emmanuel Macron. It opened major communication channels with French media, as well as the centers of culture in France.

All this helped the French public understand the situation in Egypt and realize the peculiarity of this situation in a region full of political and military turmoil.

There is also a large number of distinguished political sites and institutions in France that deal with Egypt and with CEMO which is run by Ali with a great deal of intellectual and psychological openness.

These institutions include the Arab World Institute. The sites also include Atlantico, Geo News, and others.

This is why I want to salute Carto, Le Monde en Cartes magazine and the enlightened journalists working in it, especially those who produced the latest edition of the magazine.

We are still at the beginning of the road and have not seen the light at the end of the tunnel yet.