East Med conflict could set off a ‘Euro-Middle Eastern maelstrom 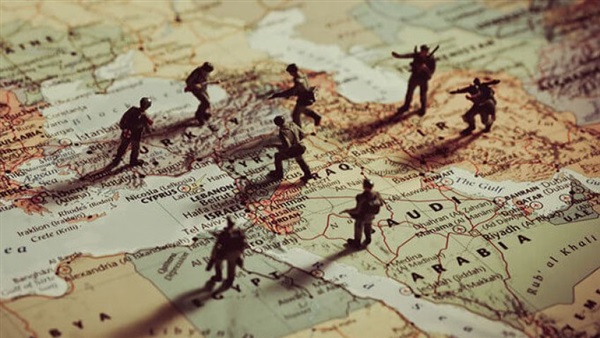 In mid-August, a Turkish and a Greek warship collided in the Eastern Mediterranean, raising tensions in the most combustible naval stand-off the region has witnessed in 20 years. The crisis had started two days before, when Turkey deployed an energy exploration ship along with its naval escort to search for oil and natural gas in waters near the Greek island of Kastellorizo—waters Athens claims as its own maritime territory.

More than ever before, the latest cycle of escalation risks spiraling into a multinational conflict.  Making a show of staunch support for Greece against Turkey, France dispatched warships to the contested waters and promised more. Egypt and Israel, which hold regular joint military exercises with Greece, have also expressed their solidarity with Athens. With France and Egypt already in open conflict with Turkey in Libya, observers around the world fear that any further escalation in the Eastern Mediterranean could set off a Euro-Middle Eastern maelstrom.

How did the Eastern Mediterranean become the eye of a geopolitical storm?

For decades, Eastern Mediterranean maritime boundary disputes were a local affair, confined to sovereignty claims and counterclaims among Cyprus, Greece, and Turkey. But over the past five years, the region’s offshore natural gas resources have turned the Eastern Mediterranean into a key strategic arena through which larger geopolitical fault-lines involving the EU and the MENA region converge. Italy and France have played integral roles in driving that change, which has placed the EU and Turkey’s already complicated relationship onto more adversarial terms.

The game changer was the August 2015 discovery of the massive Zohr natural gas field in Egyptian maritime territory by the Italian energy major Eni. The largest Eastern Mediterranean gas find to date, Zohr’s advent meant the region suddenly collectively had marketable volumes of natural gas. Eni, which is also the lead operator in Cyprus’s natural gas development, began promoting a plan to pool Cypriot, Egyptian, and Israeli gas and use Egypt’s liquefaction plants to cost-effectively market the region’s gas to Europe as liquified natural gas (LNG). The Italian company also happens to be a lead stake holder in one of Egypt’s two LNG plants.

Although commercially sensible, there was a geopolitical glitch to the Egypt-based LNG marketing scheme: It left no role for Turkey and its pipeline infrastructure to Europe, dashing Ankara’s in-progress plans to become a regional energy hub. In 2018, French energy giant Total, the EU’s third largest company by revenue, dealt another blow to Turkey by partnering with Eni in all of the Italian firm’s gas development operations in Cyprus, placing France in the middle of the eastern Mediterranean energy morass. Around the same time, Cyprus officially agreed to supply Egypt’s LNG plants for export. After Cyprus inked that deal, Israel, which had previously been considering building an Israel-Turkey undersea gas pipeline, followed suit and contracted to sell its gas to Egypt as well.

With each Turkish action, the Egypt-Israel-Cyprus-Greece front increasingly gained military support from France, Italy, and the United States, each of which has significant economic investments in Eastern Mediterranean gas. For Turkey, its NATO allies’ support of this group is a betrayal, and tantamount to a policy of containment, which it cannot tolerate.

How did Libya enter the Eastern Mediterranean Morass?

In a bid to break out of its regional isolation, in November 2019 Turkey signed its own maritime demarcation agreement with the Tripoli-based Government of National Accord (GNA) in war-torn Libya. The deal was an attempt to gain greater legal standing to challenge the maritime borders Greece had established with Cyprus and Egypt, upon which their eastern Mediterranean natural gas development plans depend. The Ankara-Tripoli maritime boundary agreement was accompanied by a military cooperation pact providing the GNA a security guarantee against the efforts of General Khalifa Haftar’s forces, backed by France and Egypt, to topple the Tripoli-based government.  The GNA formally activated its military pact with Ankara in December, linking the already tense maritime stand-off in the Eastern Mediterranean to the Libyan civil war.

From Turkey’s viewpoint, Eastern Mediterranean’s de facto maritime boundaries unjustly and illegally deny Turkey part of its rightful maritime territory. Therefore, the region’s arrangements for offshore natural gas development, which depend on these de facto boundaries, are likewise illegitimate. In turn, Turkey regards its actions as defending international law. The divide goes back to the so-called Seville map that informs the region’s commonly accepted maritime boundaries. This European Union-commissioned map study, which was prepared by the University of Seville in the early 2000s, made the decision to define maximal boundaries for Greece and Cyprus at Turkey’s expense by using the coast of every inhabited Greek island—no matter how small and no matter how close to Turkey’s shores—as its starting point. Turkey has a point about the demarcations being unfair. Turkey’s Mediterranean coastline is longer than the U.S.-Mexico border. Under the United Nations Convention on the Law of the Sea (UNCLOS) principle of equity and the international case law based upon it, Turkey is likely entitled to a larger maritime zone than it is has received on account of that extensive coastline. However, Turkey refuses to become an UNCLOS signatory, closing off its avenue of legal recourse.

Instead, Turkey found a partner with which to make its own map. In a mirror-image move to the Seville Map, the map of the Turkey-Libya maritime boundary agreement defines a maximal maritime zone for Turkey by denying any of Greece’s islands a continental shelf or an exclusive economic zone (EEZ), which provides sovereign rights over offshore energy resources. The agreement establishes an 18.6 nautical mile boundary segment between Turkey and Libya, and then, projecting out from that line, the Ankara-Tripoli map exclusively divides the entire maritime zone between Turkey and Libya, an area stretching from Turkey’s southwestern corner to the opposite coast in eastern Libya. All of Greece’s islands are effectively ignored.

Turkey’s method for drawing the Ankara-Tripoli map is specious. Most egregiously, the map ignores the presence of Crete, which is 3,219 square miles and between these coasts. UNCLOS Article 121, an article dealing with the legal status of islands, affirms that island coastlines generate continental shelves and EEZs the same as any coastal land formation, except those that “cannot sustain human habitation or economic life of their own.” Crete, with a population of almost 650,000 (nearly the same as Athens), would unquestionably generate an EEZ.

On Aug. 6 this year, Greece decided to answer Turkey in kind by signing a similar maritime delimitation agreement with Egypt. Days later, the Oruç Reis research ship and its naval escort charged into waters within Greece’s maritime boundaries.

There are strong incentives for most of the parties in the region and the European Union to contain the current escalation and find an off-ramp to the crisis. Despite backing Greece, neither Egypt nor Israel can afford to be drawn into a war with Turkey in the Eastern Mediterranean. The EU has expressed its unequivocal support for members Greece and Cyprus, but the bloc is divided on how to handle the current crisis. The six Mediterranean EU countries are evenly split.  Greece, Cyprus, and France advocate strong action against Turkey while Italy, Malta, and Spain—which all share significant commercial interests with Turkey in the central and western Mediterranean—have refrained.

Germany, holding the EU presidency since July, could break the deadlock.

Although Berlin typically defers to Paris on Mediterranean policy, it is keen to keep Ankara as close to the EU as possible. Still, Turkey is playing close to the edge.  If it pushes too far, the European Union, as well as the United States, will swing fully over to the side of Greece. The red line that Turkey cannot cross is Crete, whose southern waters are thought to contain significant volumes of oil or natural gas. Although internationally recognized as Greek territorial waters, the Ankara-Tripoli map assigns the area to Libya. If Turkey sends its energy exploration ship near the southern shores of Crete, then all bets are off.

So far, Turkey has not crossed that line. Ankara may be holding exploration in Crete’s waters as a negotiating card. Any serious deescalation process between Turkey and Greece requires a third party with sufficient sway to push Ankara and Athens into serious talks. In that respect, perhaps the most hopeful sign for the region is the recent constructive efforts of the United States to achieve a cease-fire and buffer zone in Libya. The de-linking of the various regional conflicts creates an opening for a pragmatic dialogue on Mediterranean maritime boundaries. There is a window for an off-ramp. That opportunity will require the United States, perhaps in concert with Germany, to act with diplomatic skill and commitment.