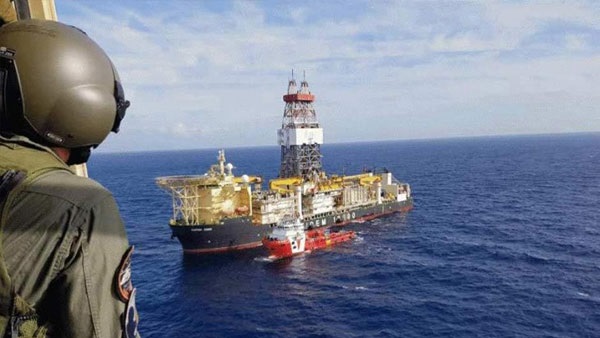 Concerns that the standoff between Greek and Turkish fleets over hydrocarbon exploration rights in the eastern Mediterranean could lead to an armed confrontation escalated when two frigates collided on Thursday.

Kathimerini said that the Greek frigate did not suffer any major damage but Turkish frigate Kemal Reis was heavily damaged. However, Turkey's pro-government media claimed the opposite, saying that Limnos was damaged.

The incident will be discussed at Friday’s extraordinary European Union Foreign Affairs Council called by EU foreign policy chief Josep Borrell amid the sharp increase in tensions in the eastern Mediterranean.

No decision is expected on sanctions against Turkey as the council does not have such authority. This, however, cannot be ruled out on August 27-28, when an informal summit of foreign ministers will take place.

Greek Foreign Minister Nikos Dendias and U.S. Secretary of State Mike Pompeo will also meet in Vienna on Friday to discuss the recent dispute between Turkey and Greece.

Turkey has said it plans to issue gas exploration and drilling licences in the eastern Mediterranean, and sent its Oruç Reis vessel near Kastellorizo on Tuesday.

"The United States and the European Union should immediately develop a plan of comprehensive joint sanctions that would be imposed on key sectors of the Turkish economy if Turkey continues to pursue illegal actions in the eastern Mediterranean and refuses to resolve these matters through an impartial international tribunal," Menendez and Von Hollen said in a letter ahead of Pompeo's meeting with Dendias.

Earlier this week, French President Emmanuel Macron said France would boost its military presence in the eastern Mediterranean and called on Turkey to halt its “unilateral” exploration activities and enter dialogue with Greece. On Thursday, two French fighter jets and a naval frigate conducted joint military exercises with Greece off the island of Crete.

The letters sent on Thursday came ahead of an EU foreign affairs meeting at Athens' request.

In the letters, Çavuşoğlu accused Greece of taking actions against Turkey’s interests, saying that the maritime boundaries agreement signed between Greece and Egypt last week demonstrated Athens’ reluctance to start an honest dialogue with Ankara, according to Anadolu.

He called on EU member states to support Turkey’s stance towards decisions taken against the country, which he said had proven its good intentions many times.

A spokesman from the United States Department of Defence expressed concern over “some of the incidents that have taken place in the Mediterranean,” during a press briefing on Thursday.

Assistant to the Secretary of Defence for Public Affairs Jonathan Rath Hoffman said Turkey and France were “both incredibly important NATO allies, and we would like to see the tensions lowered.”

Hoffman said Pentagon would like to see the two countries “continue to work together and find solutions that do not involve the necessity of having warships or have aircrafts deployed in a less-than-cooperative environment.”

Erdoğan told Merkel that Turkey “favours the resolution of issues in the Eastern Mediterranean within the framework of international law on an equitable basis and dialogue,” the statement said.​​​​​​