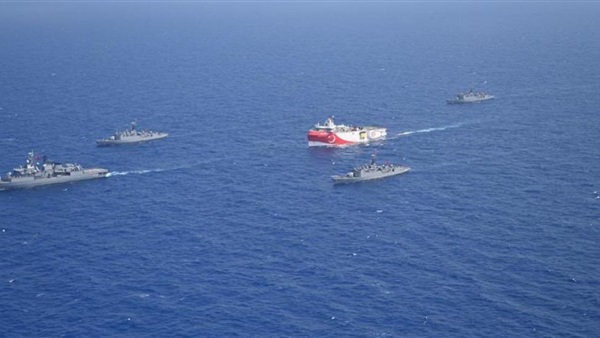 Greece was placed on high alert on Monday after Turkey's seismic exploration ship “Oruç Reis” arrived in its area of operation in a bloc territorially disputed with Greece, a move which Athens described as a threat to peace and stability in the region.

Units of Greek navy and air force deployed in the wider sea area where the Turkish research was expected, Greek newspaper Kathimerini said.

When the Oruç Reis, accompanied by Turkish naval ships, entered the Greek continental shelf, Greek warships sent messages at a frequency of about 15 minutes requesting the vessel’s removal from the area, it said.

Attached images on Erciyes' Twitter account on Monday stated that claims based on Greece’s 10-km2 island of Kastellorizo, which is 570 kilometres away from the Greek mainland, is “against the principle of equity, international law and jurisprudence.”

The latest dispute revolves around the small island 2 km from Turkey’s southern coastline that became a flashpoint between Greek and Turkish naval forces last month.

The two countries reached the brink of an armed confrontation at the end of July after Ankara’s decision to send the Oruç Reis escorted by warships to Kastellorizo to conduct oil and gas exploration. Ankara later said it would pause exploration and drilling for hydrocarbons in the Eastern Mediterranean for a month to reduce tensions with Greece and the European Union.

On Friday, however, Turkish President Recep Tayyip Erdoğan announced his country would resume exploration in territory disputed with Athens, a day after Greece and Egypt signed a maritime deal that sets the sea boundary between the two countries and demarcates an exclusive economic zone for oil and gas drilling rights.

Erdoğan claimed the Greek-Egyptian deal was a response to a maritime agreement Turkey made with Libya’s Tripoli-based Government of National Accord (GNA) in November.

Greece’s “maximalist claim” is not compatible with international law, however the country asks the European Union and the United States to support its position and apply pressure to Turkey to “cease its legitimate offshore activities”, the posted script on Erciyes’ tweet read. “This is not acceptable and reasonable.”

It also stated that Turkey should receive more maritime jurisdiction area since it has the longest coastline in the Eastern Mediterranean.

The developments are the latest in an ongoing territorial spat between Turkey, Greece and Cyprus over offshore energy resources. Greece and Cyprus say that islands have their own continental shelves granting them extensive exploration rights, a claim Turkey contests.

Ankara, which does not recognise Cyprus as a state, claims half of the country’s Exclusive Economic Zone (EEZ) on behalf of the breakaway Turkish Republic of Northern Cyprus and has repeatedly carried out warship-escorted offshore drilling in the territory.

Turkey also maintains that seismic research and drilling operations in contested waters are legitimate under its maritime agreement with the GNA.

Turkey’s ruling Justice and Development Party (AKP) Spokesman Ömer Çelik criticised Greece for calling an extraordinary meeting of the EU Foreign Affairs Council over the latest developments in the eastern Mediterranean, saying the EU should not allow Athens to turn whole of Europe into "Greek theatre.’’

"Greece has, as it always does, called on the EU for a meeting to support its unjust, lawless and aggressive policies,’’ T24 news site quoted Çelik as saying.

The latest developments in the Eastern Mediterranean are “extremely worrying” and must be solved through dialogue,  European Union spokesman Peter Stano Stona said on Tuesday.

"What is needed to be done is to engage in solving all the open issues in line with principles of good neighbourly relations, international law, and positive engagement," state-run Anadolu news agency quoted the European Commission spokesman as saying in a news conference.

Responding to Greece’s call on Tuesday for an extraordinary meeting of the EU Foreign Affairs Council on the latest developments, Stano said a decision would be reached soon following consultations among the member states.

The EU spokesman also said Ankara’s actions would also be discussed at an informal meeting of EU foreign ministers in Berlin later this month.

The Turkish coast guard rescued the two Turkish and one Syrian nationals who were on board the American-flagged motorised vessel in Greek territorial waters off of Turkey’s southwestern Muğla province. One of the Turkish nationals is in critical condition, it said.

The injured were hospitalised in the western town of Marmaris, where prosecutors have launched an investigation into the incident, Habertürk said.

He expressed confidence in the Greek military’s ability to stop the vessel escorted by at least five Turkish warships south of Turkey.

“The way in which these illegal seismic activities must and can be prevented is known to our Armed Forces since October 2018, when they attempted it effectively. We have full confidence in their abilities,” Kathimerini said, citing Tsipras, head of the left-wing Syriza party.

Tsipras was referring to another navy-escorted Turkish research vessel, the Barbaros, which conducted oil and gas exploration on a segment of the Greek continental shelf. A Greek frigate attempted to harass the Barbaros, however it was prevented from doing so by Turkish warships escorting survey vessel, according to Turkey.

Tsipras said he asked Greek Prime Minister Kyriakos Mitsotakis over the phone on Tuesday to “stop leaking unsubstantiated arguments”, such as the Oruç Reis’ exploratory activities were hindered by too many ships in its proximity.

“What concerns us is not the quality of Turkish exploratory activities, but the fact that Oruç Reis violates the sovereign rights of our homeland,” he said.

Greece will call for an emergency meeting of the European Union’s Foreign Affairs Council, Kathimerini reported on Tuesday.

The decision was announced after a meeting between Prime Minister Kyriakos Mitsotakis and Foreign Minister Nikos Dendias, the Greek newspaper said.

Greek Foreign Minister Nikos Dendias and U.S. ambassador to Athens Geoffrey Pyatt discussed tensions in the Eastern Mediterranean after Ankara sent a seismic research vessel into an area disputed between Turkey and Greece.

The two officials discussed “Turkish illegal activities” in the region, Dendias said on his official Twitter account on Tuesday.

On July 28, Turkey issued a navigational telex, or Navtex, to reserve parts of the Eastern Mediterranean, some of which overlaps with Cyprus’ exclusive economic zone (EEZ), to continue its oil and gas exploration activities, according to Greek newspaper Kathimerini.

Turkey will defend its rights in the Eastern Mediterranean - foreign minister

Turkey will not compromise in defending its rights in the Eastern Mediterranean, Turkish Foreign Minister Mevlüt Çavuşoğlu said on Tuesday.

“We will defend the rights of both Turkey and the Turkish Cypriots in the Eastern Mediterranean, to the fullest. We will not compromise on this,” reported state-run Anadolu news agency, citing Turkey’s top diplomat during a joint press conference with Azerbaijani Foreign Minister Ceyhun Bayramov.

Turkey will issue seismic exploration and drilling licenses in the western boundaries of the country’s continental shelf by the end of August and continue its operations in the Eastern Mediterranean, Çavuşoğlu said.

“Tomorrow morning, Cypriot National Guard will hold a joint exercise with Greece and France in Cyprus to increase level of interoperability among their forces in case of Turkey's invasion,” Taghvaee said on Twitter.

He added that two French Rafale fighter jets and F-16 warplanes from the Greek air force will take part in the exercises.

“The aircraft will stay for a few days in Cyprus and will fly over the island,” he said.

France and Cyprus signed a two-year defence cooperation which came into effect on Aug. 1 and covers maritime security cooperation, energy, crisis management and counter-terrorism between the two countries.

France has been openly vocal in criticising Turkey’s policies in the Eastern Mediterranean – including its territorial dispute with Greece and its military involvement in Libya’s civil war, where Ankara and Paris back opposite sides of the conflict.

“The Turkish Armed Forces have taken all necessary measures… to protect our rights and interests under international law in the maritime zones under our jurisdiction,” the ministry said in a statement.