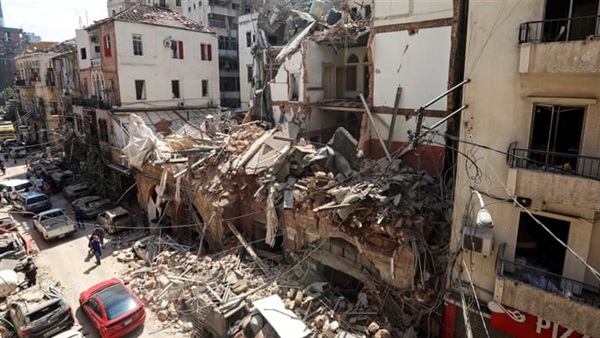 President Abdel Fattah al-Sisi coined out the term "Axis of Evil" early on to describe states that finance terrorism and terrorist groups that kill innocent people in the region.

Qatar came on top of these states. Day after day, this country's role in destroying the countries of the region becomes more apparent. This was made clear in the recent case of Lebanese capital Beirut.

Social media activists have held Qatar responsible for the destruction of the Lebanese capital because of its support to the Lebanese Hezbollah militia. They called for bringing Doha to account.

The same activists launched the hashtag "Qatar's money destroys Beirut". They used it in calling for bringing Qatar to account and kicking it out of the Arab League. They also called for kicking the Qatari ambassador out of Lebanon.

They also ran excerpts from western media articles that reveal Qatari support to the Iran-backed militia.

They denounced the Qatari conduct, especially in Lebanon.

A major explosion took place at Beirut Port on Tuesday, leaving dozens of people dead and hundreds of others injured.

The explosion was caused by the presence of tens of tons of a highly explosive material in the warehouses of the port, even as Lebanese authorities did not know anything about it.

The blast caused over 300,000 people to be displaced as well.

The explosion was so strong that some people likened it to the atomic bombings of Hiroshima and Nagasaki in Japan in 1945.

There is a theory about the blast happening coincidently. However, this does not exempt Hezbollah from blame because of its total control over the Lebanese port. The Lebanese militia also carries out suspicious activities in the port.

The explosive material causing the port explosion was found in Hezbollah's position on several occasions.