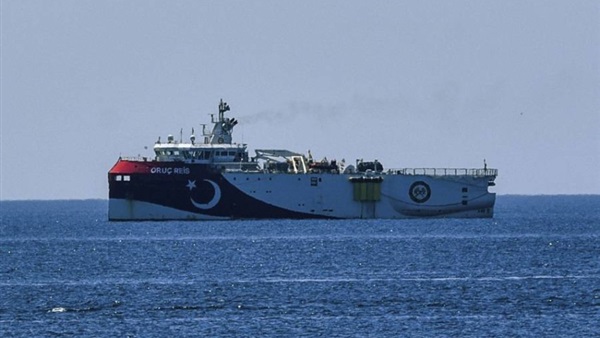 Tensions flared up Monday between Ankara and Athens after the Turkish navy issued an advisory saying that the Turkish ship Oruc Reis will carry out a seismic survey in a disputed area in the Eastern Mediterranean over the next two weeks.

The two NATO members are at odds over overlapping claims for hydrocarbon resources in the region. A similar advisory, or Navtex, last month prompted a dispute which neared military confrontation.

It was calmed after the intervention of German Chancellor Angela Merkel, leading Turkey to agree to a pause in operations.

Greek Minister of State George Gerapetritis told Greek state TV that Athens was in full “political and operational readiness.” Greece, however, stood ready to engage in a constructive dialogue with Turkey on their differences, he said.

The Navtex, issued by the Turkish navy’s office of navigation, covered an area of sea south of Turkey’s Antalya and west of Cyprus. It will be in effect between August 10-23.

The Oruc Reis vessel has already reached the location where it will operate after leaving the area where it was anchored off Antalya, Turkish Energy Minister Fatih Donmez said on Twitter.

The council includes the ministers of foreign affairs and defence.

Turkey’s president called a maritime deal between Greece and Egypt “worthless” Friday and said his country would resume its aggressive oil and gas exploration in the Eastern Mediterranean regardless of what its neighbours think.

“We have started drilling work again,” Erdogan told reporters Friday. “We don’t feel obliged to talk with those who do not have rights in maritime jurisdiction zones.”

Egypt and Greece signed a maritime deal last Thursday that sets the sea boundary between the two countries and demarcates an exclusive economic zone for oil and gas drilling rights for both nations.

That agreement spiked tensions in the Eastern Mediterranean region and was dismissed by the governments of Egypt, Cyprus and Greece as infringing on their economic rights in the oil-rich Mediterranean Sea. Erdogan vowed to keep his pact with Libya’s Islamist dominated-government in place as it offered Turkey a favourable maritime demarcation map even if it ruffled the feathers of regional neighbours.

Ankara’s maritime border demarcation deal with the GNA was coupled with another agreement that paved the way for Turkish military intervention in Libya in support of the GNA as it was on the verge of being overrun by the eastern-based Libyan National Army (LNA) last spring.

Turkey has accused Greece of trying to exclude it from the benefits of oil and gas finds in the Aegean Sea and Eastern Mediterranean, arguing that sea boundaries for commercial exploration should be divided between the Greek and Turkish mainlands and not include the Greek islands on an equal basis.

The Turkish president said his country had paused exploration in the disputed waters based on a request from German Chancellor Angela Merkel and after Turkish, Greek and German representatives launched talks to try resolve differences between Greece and Turkey. Athens counters that Turkey’s position is a violation of international law.

But Erdogan seems to have been aching all along to end the pause as continued exploration and drilling in the Eastern Mediterranean were part of a regional strategy of expanding de facto control by Turkey of the region’s maritime resources. He quickly used the announcement of the deal between Greece and Egypt to expedite the drilling activities. He said Friday the Turkish research vessel Barbaros Hayreddin, which is sailing off the western coast of Cyprus, would be working in the area.

“We have immediately resumed exploration activities,” Erdogan said after Friday prayers in the recently reconverted Hagia Sophia mosque in Istanbul.

In a television interview late Sunday, Erdogan’s spokesman, Ibrahim Kalin, said Turkey and Greece had been holding talks in Berlin for two and a half months and were on the verge of issuing a joint statement when the Greek-Egyptian agreement emerged.

“The moment the agreement with Egypt was announced, we received a clear instruction from our president: ‘You are halting the talks. Inform the Germans and the Greeks, we are not pressing ahead with the negotiations,’” Kalin told CNN-Turk television.

“This is another move to keep Turkey out of the Eastern Mediterranean and to restrict it to the Gulf of Antalya,” Kalin said.

In a brief statement late Thursday, Egypt’s foreign ministry dismissed earlier comments from the Turkish foreign ministry as “bizarre,” saying Turkey did not review the deal and its details. The Turkish ministry had declared the deal “null and void” and said it attempted to usurp Libya’s rights.

Egypt, Bahrain, Saudi Arabia, Greece and Cyprus last month sent a joint letter to the United Nations secretary-general asking that the UN not register the Turkey-Libya maritime border deal in its list of international treaties.

Experts have raised doubts about the legal competence of Sarraj to enter into such a deal having only a temporary if not an expired mandate to head Libya’s presidential council. Media reports said Sarraj himself shared in some of those reservations before signing the deal under “Turkish pressure.”

Greek Prime Minister Kyriakos Mitsotakis spoke Monday morning with European Council President Charles Michel, informing him about the Greek-Egyptian agreement and the situation in the Eastern Mediterranean, officials said. He was scheduled to speak to NATO Secretary-General Jens Stoltenberg on Monday afternoon.