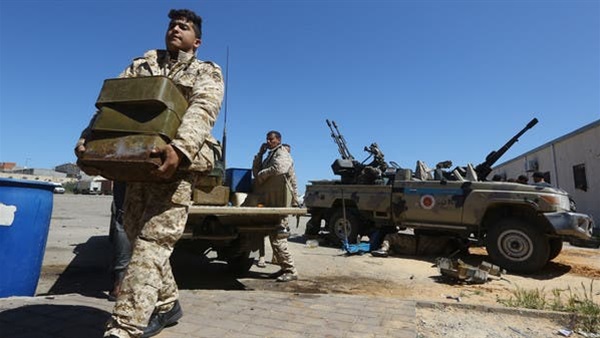 On January 10, 2018, Greece announced the seizure and suspension of a Turkish ship that was supposedly bound for Libya and loaded with 29 containers, some of which included the chemical ammonium nitrate, which is used in the manufacture of explosives.

While Greece viewed the incident as dangerous, describing the ship as a "moving bomb", there was no wide international response at the time, as it was not the first ship that Turkey had sent to Libya. News at that time ranged between a Turkish denial of the ship sailing towards Libya and a Libyan pledge to investigate the incident.

Almost two years later, on Tuesday, August 4, ammonium nitrate returned to the fore when a huge explosion rocked the port of Beirut, resulting in hundreds of deaths and more than 5,000 injured.

While most of the official and unofficial scenarios went to the fact that the explosion that left a huge orange cloud over Beirut occurred as a result of storing 2,750 tons of ammonium nitrate at the port, the accident recalled the incident of the Turkish ship that Greece seized in early 2018.

Since the Beirut explosion, Libyan voices have accused Ankara of playing with the North African country’s security after sending a ship to the coastal city of Misrata that could have caused a similar explosion as in Lebanon. Misrata is the first destination for Turkish arms ships in Libya.

In a report entitled “Ammonium nitrate: Fuel of hell from which Greece saved Misrata a fate similar to Beirut” published on August 6, the Libyan newspaper Al-Marsad said that Misrata was close to turning into a city of disaster similar to Beirut if the Turkish ship had been docked on its shores and made any error in storing its containers.

Assessing the danger of the ship, Turkey tried to circumvent the incident at the time, as the Turkish embassy in Tripoli claimed the ship was not heading towards Libya, but was on its way to Ethiopia.

While Turkey’s claims were rebutted by the fact that Ethiopia does not overlook any seas and therefore does not have a port, the Misrata Free Zone, the body responsible for managing the port, revealed in a statement on January 13, 2018, that the port administration had received a request from the Turkish ship to dock at the port of Misrata.

Although there is comfort in the fact that the Turkish ship laden with ammonium nitrate did not dock on the shores of Misrata thanks to the Greek efforts, Ankara’s policy towards Libya, which relies on supplying armed groups supporting the Government of National Accord (GNA) and its militias with weapons through an open sea route agreed upon by Ankara and the GNA, opens the possibility that Turkey has already sent shipments of similar explosives to Libya or could do so in the future.

Faced with this scenario, Misrata moves closer to the scenario of Beirut, which lost half of its features, according to Libyan MP Mohammed Amer al-Abani.

Abani said that Ankara does not hesitate to do anything it wants in Libya, even if it will have catastrophic results or violate international decisions and agreements. He noted that Turkey and the Brotherhood are involved in fueling the conflict in Libya by introducing weapons and mercenaries, adding that it cannot be ruled out that Misrata could experience an incident similar to Beirut, which would have dire consequences.

On how to prevent the recurrence of such a horrific accident, Abani stated, “I have previously called for political and diplomatic action that puts an end to the Turkish depravity in the Middle East, the Eastern Mediterranean, and Libya,” calling for regional states to submit complaints to the UN Security Council with the aim of imposing international penalties as a deterrent to prevent Turkey from proceeding with its policies in Libya.