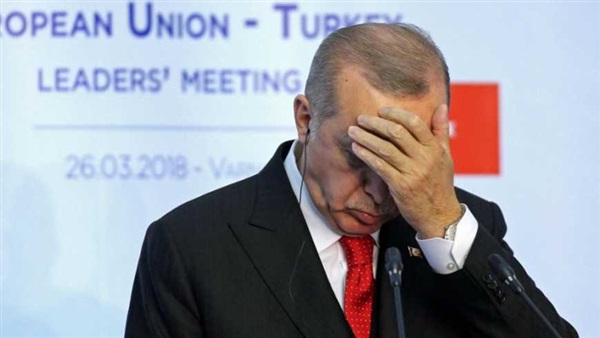 Turkish President Recep Tayyip Erdogan is reaping the fruits of his failed economic policies, as the Turkish lira collapses before sanctions expected at the end of August are even applied, which will further complicate the scene, as the Turkish Central Bank has raised its expectations for inflation this year to 8.9% after the lira’s poor performance this week.

Turkish Central Bank Governor Murat Uysal said in a televised news conference in Ankara to announce the bank's quarterly inflation report that the bank has revised its inflation expectations for this year to 8.9% from 7.4% in its last report issued in April.

Uysal said that consumer price inflation, which accelerated to 12.6% in June, is expected to enter a bearish trend this month.

Although Uysal claimed that the central bank's monetary policy is in line with inflation expectations, he expected inflation to slow to 6.2% at the end of next year, but he had to adjust his expectations. He aims to reduce inflation to 5% in the medium term, but it seems far-fetched under these conditions.

However, Turkey's expectations for the inflation rate are still far from international estimates. The credit rating agency Standard and Poor's (S&P) predicted that Turkey will record inflation rates this year of 10.6%, and 9.4% in 2021, while unemployment this year is expected to reach 14.3%, and 12.4% next year.

S&P also said in its recent report on Turkey's credit rating that the Turkish economy is expected to contract by 3.3% due to the effects of the corona pandemic, although economic growth will likely recover during the second half of this year.

The Turkish lira has witnessed a sharp decline in recent days, with the exchange rates of the dollar and euro reaching record numbers. According to a report, the central bank pumped $2 billion into the market to stop losses to the local currency.

According to the Turkish Statistical Institute (TurkStat), the unemployment rate in Turkey reached 12.8%, while the inflation rate rose to 12.6% in June from 11.3% in May.

In light of unpublished figures, Goldenman Sachs expected violent fluctuations in the Turkish lira during the second half of this year.

Turkey is ranked fourteenth in the list of countries with the highest inflation rates around the world. Day after day, opportunities for the Turkish government to achieve Erdogan’s goal of changing the annual inflation rate to the single digits are reduced.

A few days ago, the Turkish president reiterated his determination to reduce inflation to single digits at soon as possible, indicating that attempts at home and abroad to block Turkey’s rise will not succeed.

Last November, Erdogan said that “inflation will decline to the single digits by the year 2020,” promising at that time that he would cut the interest rate from about 40% to 13.5% with his appointment of a new central bank governor.

Meanwhile, Turkish economist Atilla Yeşilada reported last month that he had conveyed warnings that a 20% rise in bank loans since the beginning of this year could lead to a debt crisis.

In the same context, Oxford Economics confirmed that Turkey is experiencing a major crisis regarding the price of the Turkish lira against foreign currencies, noting that the current crisis exceeds the Turkish crisis in 2018, according to the Turkish newspaper Yeniçag.

The newspaper added that the officials who tried to prevent the depreciation of the Turkish lira did not leave any option to increase interest. The report highlighted the risks of borrowing by the Turkish Central Bank, noting that this would cause a crisis for the Turkish lira, which is trying to withstand the exchange rate of the dollar.

Currency markets in Turkey have also witnessed insane fluctuations in the prices of the euro against the Turkish lira.

The Turkish newspaper T24 said that the Turkish lira is currently witnessing a situation of significant instability against the US dollar, as the dollar witnessed an increase from 6.486 to 7.126 liras and then decreased to 6.9752 liras, while the euro recorded an increase from 7.9708 to 8.2477 liras.

It is worth noting that Turkey also suffered a severe financial and monetary crisis in 2018, which pushed exchange rates to low levels amid fluctuations in the abundance of foreign exchange in official markets.

These economic plunges are expected to increase with the application of economic sanctions against Turkey, as Greek Foreign Minister Nikos Dendias said that Greece wants its European Union partners to prepare a list of “painful” economic sanctions to be used against neighboring Turkey if it goes ahead with gas and oil exploration off the Greek islands. Greece has called for tougher action by the European Union toward Turkish gas exploration activities in the Mediterranean. Relations between the two historic regional rivals and NATO allies have deteriorated in recent months.

In an interview with Star TV, Dendias said that he informed his counterparts in the European Union that “if Ankara goes ahead with its plans to explore off the islands of Crete, Rhodes and Karpathos, the EU must respond with a package of harsh penalties.”

Movements from the Greek Cypriot government to explore for natural gas off its shores have been met by Turkish attempts to explore for gas in the same areas.

European Parliament members have called on the European Commission to impose strict and concrete economic sanctions against Turkey, accusing Ankara of undermining international law. Some members of the European Parliament also demanded that EU High Representative for Foreign Affairs and Security Policy Josep Borrell “stand firmly against Ankara and ask it to stop its illegal activities in the waters of Cyprus and put an end to threats against Greece.”

“The European Union is Turkey's largest trading partner,” Dendias said, stressing that “the bloc could create a major problem to paralyze the Turkish economy.”

Greece says it has exclusive rights to the areas Turkey is targeting in exploration areas located off Crete and the Turkish coast, while Ankara believes that it is justified in its exploration after it signed a maritime border demarcation agreement with the Libya’s Government of National Accord (GNA).