Turkey to close window on press freedom once and for all 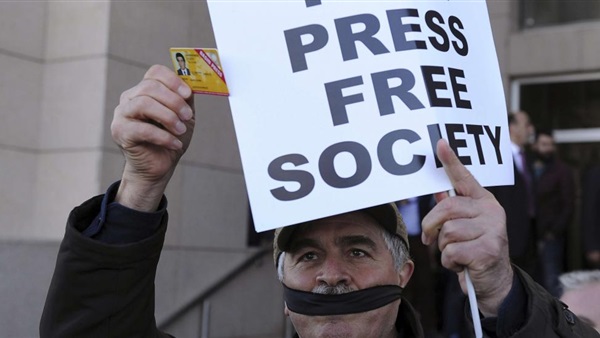 Turkey’s newly-passed social media law will silence criticism of President Recep Tayyip Erdoğan, and the country has been “taking steps to close the window on press freedom once and for all,” Reporters Without Borders (RSF) Germany Director Christian Mihr wrote in an article for Deutsche Welle English on Thursday.

Accelerating after a failed coup attempt in 2016, Turkey has been targeting journalists in unfair trials and media pluralism has been all but destroyed in the country, Mihr said.

The bill ratified in Turkish parliament on Wednesday stipulates that social media platforms with more than one million daily hits appoint a legal representative to facilitate requests by Turkish authorities, comply with requests to remove content, and keep their databases in Turkey so courts are able to access user data and identifying personal information.

However, it won’t go into effect immediately. Platforms have until Oct. 1 to appoint their representatives.

“Following warnings and various penalties, bandwidth throttling sentence will be doled out on April 1, 2021 the earliest, cyber rights activist and professor of law Yaman Akdeniz said in a tweet. “Until then, the government will be waiting to see if Twitter in particular will actually come (to Turkey).”

The RSF “rejects the expansion of Turkey’s internet law,” the director said, pointing to the importance of access to independent information, “vitally important in a society as highly polarized as Turkey is today.”

Turkey has stepped up online censorship, with at least 2,950 news articles and other journalistic content blocked in 2018, Mihr said. The content, sometimes blocked arbitrarily without any court order, included “research and reports on political corruption, cronyism and human rights and labor abuses,” he said.

“Social media is one of a very limited number of avenues where concerns over workplace deaths and labour movements, violence against women, social movements, even animal rights can be voiced where traditional media obscures them,” technology columnist for Evrensel newspaper İsmail Gökhan Bayram wrote in an earlier article.

“We are entering a different phase,” Akdeniz told Ahval.

Akdeniz said the legislation would allow the government to remove any content it deemed inappropriate, and clear its past, using an example from the 2013 corruption probe that implicated several top-level members of the ruling Justice and Development Party (AKP).

“When you search for news about December 17-25, you will only be able to access the news of the media close to the government,” Akdeniz said. “The government will try to AK-wash its history.”

PEN America in a statement called the law “aggressive,” and a “direct and multifaceted threat to free expression.”

It will do significant damage by “enabling politically influenced censorship, the chilling of free expression, and the potential for mass and politically motivated surveillance,” the literary network said.

Provisions in the law will “create a devil’s bargain for platforms choosing to operate in Turkey: anticipate the ruling party’s needs and remove or block anything politically inconvenient, or forego operation in Turkey entirely,” the statement cited PEN America’s digital freedom program director Matt Bailey as saying. “The result could be proactive commercial censorship, prolonged and uncertain judicial appeals processes, and state incursions on privacy and online anonymity.”

Turkey’s main opposition Republican People’s Party (CHP) had previously announced that it would appeal to the Constitutional Court (AYM). CHP Deputy Chairman Onursal Adıgüzel had warned of a new period of censorship, and possible police raids on data storage centres “at a time when the judiciary is not independent.”