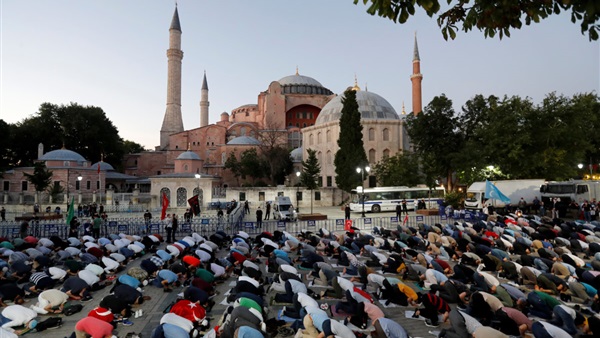 The Hagia Sophia’s re-conversion to a mosque is another blow to the historic Christian presence in Istanbul that will deepen divisions and threaten religious minorities in Turkey, Religion Unplugged reported on Thursday.

“In Turkey, where minorities have been victims of systematic discrimination and persecution, the discourse of conquest is likely to fuel new waves of hate crimes,” Tuğba Tanyeri-Erdemir, research associate and specialist in cultural heritage and religious minorities at the University of Pittsburgh, told Religion Unplugged.

Ramazan Kılınç of the University of Nebraska at Omaha and expert on religious minorities in Turkey told Religion Unplugged that the Turkish government did not take their Greek-Turkish citizens into account when making the decision to re-convert the Hagia Sophia - reflecting a larger problem.

“Many Turks do not even realise that minorities are Turkish citizens,” he said. “They are considered as ‘alien’ in the lands that they have been for centuries. I think this move will contribute to that alienisation.”

Christians, Jews, Yazidis, and other religious minorities make up less than 0.02 percent of the population, and the Greek-Turkish community in Turkey is now around 2,500 people, many whom are elderly, according to Matthew John Hadodo, a sociolinguist at the University of Pittsburgh specialising in the Istanbul Greek dialect.

However, Hadodo told Religion Unplugged that this does not mean the small community will leave Turkey. “They have survived through much more and as a community feel that they will always have a presence in Istanbul,” he said.

The Hagia Sophia, originally built as a Byzantine cathedral in 537, was turned into a mosque following the Ottoman conquest of Istanbul on May 29, 1453, and then became a museum in 1935 under Mustafa Kemal Atatürk’s presidency.

On July 10, Turkish President Recep Tayyip Erdoğan announced the opening of the Hagia Sophia to Muslim worship after the Council of State – Turkey’s highest administrative court – ruled that the building’s conversion to a museum by modern Turkey’s founding statesman was illegal.

The first Friday prayers following the conversion were held at the site on July 24.

Tanyeri-Erdemir told Religion Unplugged that the conversion of the Hagia Sophia could only be done once, and was unlikely to distract people from Turkey’s economic, social, and political troubles for long.

“Hagia Sophia's opening as a mosque created a euphoria for those who had been longing for this moment, however, once it is done, the Turkish citizens will have to face that Turkey's long-standing problems are still there and continue to worsen,” she said.