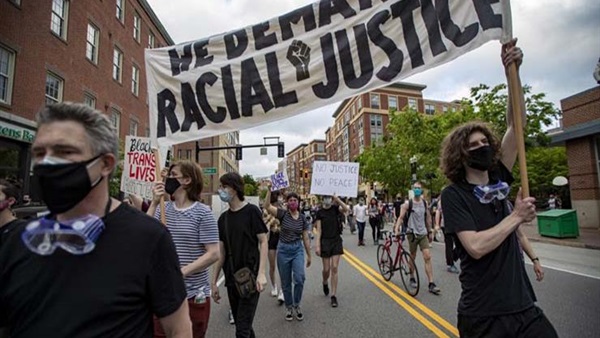 After the death of George Floyd, protests, riots and sabotage spread throughout the United States, and officials blamed the violent nature of some demonstrations against members of the "Antiva" movement.

Trump said at the Kennedy Space Center on Saturday that "violence and sabotage" taking place in the country "are being led by Antiva and other left-wing extremist groups that terrorize innocent people, destroy jobs, harm businesses and burn businesses and buildings."

In a report published by CNN on Sunday May 31, 2020, she said that there was as yet no evidence that the group was involved in recent protests, but that this does not deny that its members have become more visible in recent years.

Antiva is an abbreviation of "anti-fascist", meaning "anti-fascist", and is used to define a wide range of people whose political beliefs tend to the left - often the extreme left - but not compatible with the Democrats' party program.

The movement is active during political conflicts, whether in the Internet or in public places, and it uses many means of violence, whether destroying property and beating and harassing opponents who describe it as racist, fascist or right-wing extremists. These demonstrators are also anti-capitalist and most of them embrace communist, socialist, and anarchist ideas with some liberal ideas. They are distinguished by wearing black and concealing their faces as masked persons. Their influence and protests increased after Donald Trump announced his candidacy for the US presidency and after he won the presidency, Donald Trump recently proposed classifying them as a terrorist group.

When Italian dictator Benito Mussolini succeeded in unifying power under his fascist national party in the mid-1920s, an anti-fascist movement appeared in Italy and countries like the United States. Many of the anti-fascist leaders in the United States were trade unionists, anarchists, and immigrant socialists from Italy with experience in organizing work and combat struggle. Ideologically, the Antiva movement considered itself the successor of anti-Nazi activists in the 1930s, and European activist groups, originally organized to oppose fascist dictatorships during World War II, which reappeared in the 1970s and 1980s, in order to oppose the White Base and the Blackheads movement Then it finally spread to America. After World War II, and before the advent of the anti-fascist movement of Antiva, violent clashes with fascist elements continued from time to time.

It is possible to trace the policies of the modern Antiva movement to the opposition to the breaching the white power heads of British rock bands in the 1970s and 1980s, and the emergence of neo-Nazism in Germany following the fall of the Berlin Wall. In Germany, left-wing youth, including anarchists and supporters of the punk group, renewed anti-fascism on the street level. Author Peter Pinart writes that "in the late 1980s, left-wing supporters of the hatred in the United States began following their example, although they called their groups the Anti-Racism Movement (ARA) based on the theory that Americans are more familiar with fighting racism than fighting fascism.

Mark Bray, a historian at Dartmouth College and author of Anti-Fascism: An Anti-Fascist Handbook, Anti-Racism Movement (ARA) has been described as the ancestor of the American anti-American group in the United States and Canada. In the late 1980s and 1990s, anti-racist movement activists toured with lewd bands and popular curl heads to prevent the Ku Klux Klan, the neo-Nazis and other supporters from the white race's superiority from the crowd and enlistment. Their slogan was "Go where they go", which means they will face ultra-right activists at concerts and actively remove their materials and objects from public places. In 2002, the Anti-Racism Movement (ARA) suspended a speech in Pennsylvania by Matthew F. Hill, head of the creator's group The World Church of the White Race, which led to fights and twenty-five arrests. Antiva Rose City, formed in Portland, Oregon in 2007, was one of the oldest Antiva groups in the United States.

Other groups of Antifae exist in the United States that have other origins, for example in the city of Minneapolis, Minnesota, where a group called Baldez was formed in 1987 with the goal of directly fighting the neo-Nazi groups.

How did the group start?

The exact origins of the group are unknown, but it can be traced back to Nazi Germany and the "anti-fascist" group, an armed group founded in the 1980s in the United Kingdom.

Brian Levine, director of the Center for the Study of Hate and Extremism at California State University in San Bernardino, says contemporary "Antiva" members have become more active in introducing themselves to public gatherings and the ranks of the progressive movement.

He added: "What they are trying to do now is not only to become prominent through violence in these important marches, but also communication through small meetings and through social networking to encourage progressive people who are deprived of their rights who were hitherto peaceful."

Where are they protesting?

Members of the movement were seen participating in right-wing events and prominent events throughout the country.

In August 2017, group members appeared in Charlottesville, Virginia, to condemn racism and counter protests against hundreds of white nationalists opposed to the removal of the statue of US military commander Robert Edward Lee (1807-1870).

Earlier that year, she protested the appearance of Milo Yiannopoulos, a provocative element of the alternative right, at the University of California, and also protested the inauguration of President Donald Trump in January 2017.

While it is difficult to distinguish between "Anteeva" activists and other demonstrators, but some wear black clothes from head to toe, members call this costume "the black block", and they wear masks to hide their identities from the police and whoever they protest against.

The group is known to have damaged property during the protests. In Berkeley, California, protesters in black masks threw Molotov cocktails and smashed windows at the Student Union Center.

Crowe, who has been involved with Antiva for nearly 30 years, says that members use violence as a means of self-defense and believe that destroying property is not the same as violence.

For his part, Levin said that "Antiva" activists feel the need to participate in the violence because they "believe that the elites control the government and the media. So they should make a direct statement against the people they consider to be racists."

White nationalists and other members of the so-called alternative right denounce the members of "Antiva", and sometimes call them the "alternative left".

Many white nationalists who took part in the Charlottesville marches claimed that the "Antiva" group had led the protests to violence.

Protesters in several US cities and states continued to vent their anger over the death of a defenseless, dark-skinned man in Minneapolis, Minnesota, named George Floyd, after he appeared in a video clip as he had trouble breathing while a white policeman knelt on his neck.

The US National Guard said that since Sunday morning, it had pushed 5,000 soldiers to contain tensions in 15 states and Washington, DC, after the killing of George Floyd.

In a statement, the US National Guard added that it had placed an additional 2,000 soldiers on standby to help contain the unrest after Floyd's death.