Turkey’s negotiating window with Greece, EU may be closing 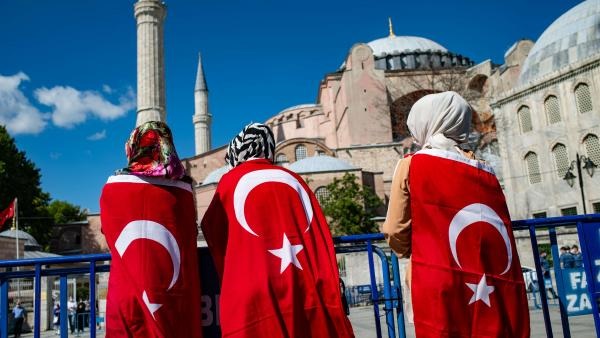 So many urgent issues are undermining Greece-Turkey relations today it’s almost a surprise these two neighbours with a history of conflict are not already at war.

On Friday, Turkish President Recep Tayyip Erdoğan finalised the conversion of Istanbul’s iconic Hagia Sophia from a museum back into a mosque, a week after Greece’s Foreign Ministry denounced such a move as unacceptable and a breach of the structure’s UNESCO World Heritage status.

Built as a cathedral in the 6th century by Byzantine Emperor Justinian, Hagia Sophia holds a special place in the hearts of many Orthodox Christians, particularly in Greece, which sees itself as the heir of the Greek-speaking Byzantines of Constantinople. Greek officials described the reversion as an "open provocation to the civilised world" and said “the nationalism displayed by Erdoğan... takes his country back six centuries”.

Underscoring Turkey’s continued claims on a number of Greek islands in the Aegean Sea, Turkish Defence Minister Hulusi Akar on Wednesday told the BBC that, despite the Lausanne Treaty barring any militarisation of 23 Aegean islands, Greece maintained a military presence on 16 of them.

“Turkey’s military and political elites completely disregard that Greece is not just about the mainland,” Nikos Michailidis, an assistant professor of anthropology at the University of Missouri-St Louis, told Ahval in a podcast. “We have thousands of islands and this is something they don’t want to see, don’t want to accept.”

Last week, the Greek air force intercepted Turkish jets and engaged them in mock dogfights after Turkish fighter planes committed 50 violations of Greek airspace over the Aegean in a single day, according to the Greek Reporter.

Cyprus has been a major source of Turkish-Greek tensions since at least 1974, when Turkish forces invaded the waterlocked nation in an effort to head off a coup plot from Athens. The island has since been divided between the EU-recognised Republic of Cyprus and the Turkish Republic of Northern Cyprus, recognised only by Turkey. Since early 2019, Turkey has launched six natural gas drilling operations in waters claimed by Cyprus and has said it plans more.

On Wednesday, the United States announced that Cypriot soldiers would be able to take part in a major U.S. military training programme – a possible first step toward ending the U.S. arms embargo on Cyprus. Turkey quickly criticised the move.

On Thursday, the European parliament debated Turkey’s negative role in the Eastern Mediterranean and Libya, where Ankara has been backing the Tripoli-based Government of National Accord (GNA). That support has increased in recent months in part because Ankara signed a maritime borders deal with the GNA late last year that essentially erased the island of Crete, which lies between the coasts of Libya and Turkey, off the map.

This week, Turkey reserved a vast area of the Eastern Mediterranean between Libya and Crete for naval exercises. Ankara has said it plans to begin drilling soon off the Libyan coast and possibly near Crete.

“The Greek government does hope that they won’t dare to go and continue their drilling off the coast of Crete,” said Michailidis. “This would create serious complications that might end up in a military confrontation.”

Athens has warned that any drilling in its continental shelf will spark a heated response, and moved to strengthen ties with regional ally Israel. The two signed several defence agreements this month, outlining greater collaboration in weapons and training.

Their alliance is also about energy. In January, Greece, Israel and Cyprus signed a deal to build a 1,900-km undersea pipeline to carry natural gas from the Eastern Mediterranean’s gas fields to Europe.

Last but not least is migration and refugees. London-based research group Forensics Architecture concluded this week that it was highly probable that Mohammed al-Arab, a 22-year-old from Aleppo, was killed by Greek soldiers in March. He was among thousands of migrants seeking to enter Greece after Turkey followed through on Erdoğan’s threat to “open the gates” for refugees, possibly repeating the crisis of 2015-2016, when some 2 million migrants entered Europe.

Athens has rejected accusations of using live fire, and many have accused Turkey of weaponising refugees to pressure Europe into providing greater funding for the 3.5 million refugees already in Turkey, or to come to Turkey’s aid in Syria’s Idlib province, where some 2 million displaced people are living in ad hoc camps along the Turkish border.

Greece and the European Union are now facing calls to investigate al-Arab’s death amid fears of increased Greek aggressions along the border. Deutsche Welle and Belllingcat reported in May that Greek police had been forcibly deporting asylum-seekers back into Turkey, as Turkey had reportedly done with Syrians last year. There have also been several reports that Greek security forces have pushed migrant boats back toward Turkey and sent migrants back across the Aegean on windowless inflatable rafts.

“You have this ongoing paranoia within Greek politics about having to face a second wave like in 2015,” Alexander Clarkson, a lecturer on European studies at King’s College London, told Ahval in a podcast.

He said that more nationalist, authoritarian elements within the Greek police and security services had come to the fore, and European officials had done little to change their methods.

“The EU didn’t just tacitly back the use of maximum force against potential refugee entrances, they actually even praised it to a certain extent,” said Clarkson.

Michailidis, the anthropology expert, saw Athens doing its best in a difficult situation for which it shouldered little responsibility, unlike Turkey, which had played a role in the Syrian civil war since its early days and more recently mounted several military offensives into northern Syria.

German Interior Minister Horst Seehofer might agree. On Tuesday he said it was shameful that the EU had yet to solve the migration issue five years after the start of the 2015-2016 refugee crisis.

“We cannot leave Italy, Malta, Greece or Spain alone to deal with this issue,” Seehofer said, explaining that most EU countries had declined to accept new arrivals as part of a new initiative. “Very many member states refuse to get involved.”

At least until September, when the European Commission is expected to present its migration reform proposal, Greece will remain exposed to the whims of the Turkish government. Turkey’s Foreign Minister Mevlüt Cavuşoğlu on Monday said Turkey could no longer hold back those who wanted to leave for Europe.

On Thursday, the largest political group in European Parliament, the European People’s Party (EPP), urged the EU and member states to vigorously defend Cyprus and Greece against Turkish aggression by deploying naval forces or levying sanctions.

In a tweet, EPP chairman Manfred Weber described Turkey’s actions as unacceptable. Vangelis Meimarakis, head of the EPP’s Greek delegation, said Erdoğan had “crossed the line, and if he continues to challenge Europe there will be a single and immediate response”.

Clarkson said the time had come for Turkey to take advantage of its gains and begin talks. “In the end, the East Med dispute will have to be negotiated,” he said.

This week, Greek Prime Minister Kyriakos Mitsotakis said that since their June 26 phone call he felt comfortable picking up the phone to speak to Erdoğan. But does his counterpart feel the same way?

“Is Turkey willing to sit down and use the kind of advantages its build up to then follow a pathway through to some negotiated settlement, which will require compromises, will require approaching Athens and Nicosia?” he said.