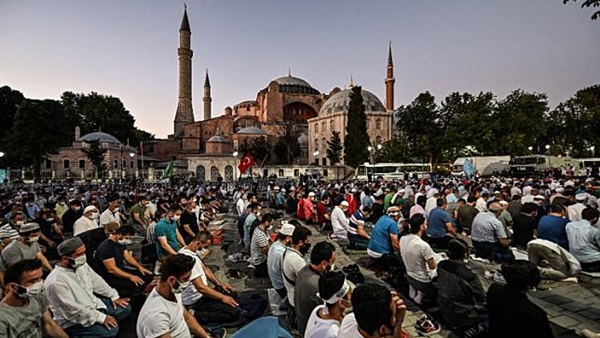 Greece intends to place sanctions against Turkey for its decision to revert Istanbul’s Hagia Sophia landmark into a mosque, Greek City Times reported on Saturday.

Turkish President Recep Tayyip Erdoğan handed administrative control of the Hagia Sophia to Turkey’s top state religious body on Friday, after the country’s highest administrative court annulled a 1934 decree that repurposed the disputed site from a mosque to a museum.

“Erdoğan made a historic mistake, a mistake that creates a gap, I hope it is not bridged,” the news site quoted Greek government spokesperson Stelios Petsas as saying.

“Greece condemns this action and will do everything in its power to have consequences for Turkey.”

Petsas said “everything is on the table and the possibility of sanctions not only from Europe but also from international organisations, such as UNESCO”, without giving further details into the nature of the prospective sanctions over the UNESCO-protected World Heritage Site.

The Hagia Sophia, originally built as a cathedral of the Eastern Roman Empire in 537, was converted into a mosque following the Ottoman conquest of Istanbul on May 29,1453 and then into a museum in 1935, in the early years following the founding of Turkey’s republic.

Recently, Erdoğan has repeatedly suggested turning the landmark into a functioning mosque again to fulfil a long-standing demand by Turkey’s Islamists, much to Greece’s ire.

“Anyone who violates international law must understand that for this delinquent behaviour there are sanctions that hurt,” said Petsas.

“The issue of Hagia Sophia is an international issue. The only sure thing is that such a delinquent behaviour and such a great insult should have a similar response.”