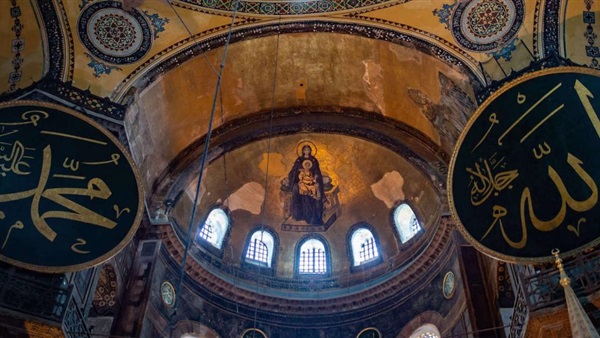 Questions are being asked about the fate of numerous Christian mosaics inside the Hagia Sophia after the Turkish government’s decision to re-convert the Hagia Sophia museum into a mosque, Greek Reporter said on Saturday.

Karar news website reported on Saturday that curtains and folding screens will likely be used to cover the site’s many Christian mosaics, icons and symbols during Muslim prayers, and that Turkish officials had pledged not to remove or permanently cover them up.

Some of the mosaics in Hagia Sophia are considered masterpieces, and they serve as a catalogue of Byzantine art. The motifs used in the creation of the mosaics are mostly images of Christ and portraits of imperial figures.

The Hagia Sophia, originally built as a Byzantine cathedral in 537, was turned into a mosque following the Ottoman conquest of Istanbul on May 29, 1453, and then became a museum in 1935 under modern Turkey’s founder Mustafa Kemal Atatürk’s presidency.

On Friday, Turkish President Recep Tayyip Erdoğan announced the opening of the Hagia Sophia to Muslim worship after the Council of State - Turkey’s highest administrative court - ruled that the building’s conversion to a museum by modern Turkey’s founding statesman was illegal.

In a televised address, Erdoğan said that prayers will be held at the site on July 24.

The Ottomans had covered up the mosaics when the Hagia Sophia was converted into a mosque, and they were uncovered again after the site was turned into a museum.

In his televised speech on Friday, Erdoğan sought to reassure Christians that they would still be welcome at the site and began his speech by announcing that the $15 entrance fee will be waived, since the Byzantine-era monument is no longer a museum but a mosque and an active place of worship.

The Hagia Sophia’s doors will remain open “for all, local and foreign, Muslim and non-Muslim”, he said.

Among the artwork is the “Mosaic of the Apse,” completed during the 9th century, which decorates the half-dome located behind the altar. It is a representation of Virgin Mary sitting on a throne, with the baby Jesus sitting on her lap.

The “Pantakrator” mosaic, located on the top of the Imperial Gate, shows Jesus blessing the world with his right hand and carrying the scriptures in his left hand.

During the centuries of Ottoman rule that followed Istanbul’s conquest, the mosaics were covered with plaster several times, and were repaired as old plaster would peel away and reveal the images underneath. This practice was most likely done because Islam forbids the presence of icons in places of worship.

Erdoğan in his Friday address said the plastering was done “to preserve the mosaics,” so they could survive further into the future.