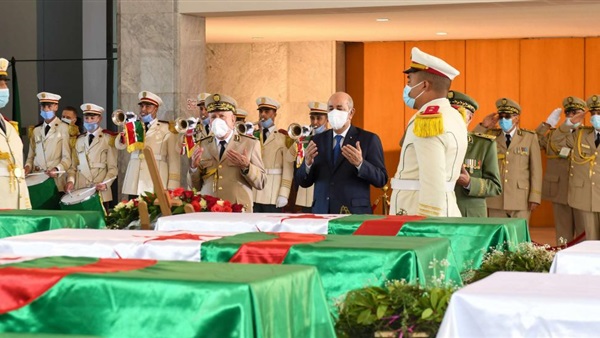 Frequent contacts between Algerian President Abdelmadjid Tebboune and his French counterpart Emmanuel Macron are signalling closer coordination between the two countries about issues in the region, especially those related to the Sahel-Saharan region and Libya.

This comes at a time when the Algerian mediation to find a solution to the Libyan file seems to be in need of broader support in order to bypass the confines of political contention.

The diplomatic and political rapprochement between Algeria and France was boosted by recent phone conversations between Tebboune and Macron. The latest, on Thursday, was the third phone conversation during the past six weeks  during which the two presidents discussed their vision for restoring stability in the region and the approach to resolving the crisis in Libya.

The call came as bilateral relations warmed up again after Algeria recovered a first batch of the remains and skulls of Algerian resistance fighters kept until now at the Musée de l’Homme in Paris. In an interview with French state-owned TV channel France 24, last week, Tebboune praised what he called “Macron’s integrity and efforts in settling the historical files between his country and Algeria.” He said he and Macron "could go a long way".

A statement by the Algerian presidency said that President Tebboune received a phone call Thursday from President Macron, in which “the two presidents discussed the prevailing situation in the region, especially in Libya and the Sahel,” and that “they agreed to continue coordination and consultation between the two countries as key actors in the region, and to launch a number of initiatives aimed at promoting political solutions to the prevailing crises.”

The statement alluded to signs of convergence in the visions of the two parties on the prevailing situation in the Saharan Sahel and Libya, in a way that overcomes the clash of the past years between the two countries and ushers in a diplomatic partnership and a sharing of interests, especially as Algeria prepares to lift the constitutional ban on its army being involved in operations outside its territorial borders. This will give Algeria more leeway to contribute to managing conflicts, especially in the context of the war on terror.

Observers do not exclude the possibility that the Algerian-French rapprochement could lead to the formulation of an initiative on Libya, with the participation of the international community. Such an initiative would be based on the imperative of a political solution in Libya and the necessity of the exit of all foreign forces. That would mean first of all ending the intervention of the Turkish army supporting the government of Prime Minister Fayez al-Sarraj, which has become a strategic concern for Algeria and France, following Ankara’s proclaimed intention to establish a “new Turkey” in the region by fostering a far-reaching partnership with its Libyan partners.

It seems that Paris’s annoyance at Turkish expansionism in the region and at Ankara's attempts to undercut France’s influence in Algeria, prompted the Elysée to make some concessions in the largest outstanding files between France and Algeria, starting with the so called file of “Memory and History”. This is likely to pre-empt Turkish endeavours and turn contentious files into opportunities for partnership in diplomacy, as is the case in economics, trade, cooperation, immigration and issues pertaining to the large Algerian community in France.

Algeria expresses real concerns about the Libyan crisis, given the latter’s serious security and military repercussions on stability in the region, especially that Algeria shares with Libya about a thousand kilometres of land borders in rugged desert terrain, in addition to the proximity of the border to strategic interests such as oil and gas fields and the international companies operating there.

The Algerian military quickly appointed General Omar Tlemsani as commander of the Fourth Military Zone of ​​Ouergla in the far southeast of the country, where the land border with Libya lies. Tlemsani is succeeding the late General Hassan Allaimia, who died of health-related causes. The move reflects the importance attached by the Algerian military leadership to troop and logistical readiness in the area in anticipation of any contingency on its borders.

In a statement to local and French media, President Tebboune had warned against “scenarios of turning Libya into a new Syria or Somalia, and into fertile ground for producing terrorist groups, which will be disastrous for security and stability in the region forever.”

At the United Nations Security Council meeting on Libya on Thursday, Algerian Minister of Foreign Affairs, Sabri Boukadoum, reiterated his country's readiness to “play a mediating role,” and stressed that “all Libyan parties have agreed to participate in any Algerian initiative,” in reference to Algeria's efforts to resolve the Libyan crisis in coordination with the international community.

Boukadoum summarised his country's initiative in three axes: “An immediate cease-fire, reducing escalation in all areas, including in the energy sector and the distribution of wealth, and helping to bring the Libyan rival parties to the negotiating table.”

In June, Tebboune received the representatives of the two main rivals in the Libyan conflict, GNA Prime Minister Fayez al-Sarraj and Speaker of the Libyan Parliament Aguila Saleh. The meeting took place following the takeover by GNA forces, with intensive Turkish military support, of western Libya following the withdrawal of Khalifa Hafatar’s Libyan National Army from the outskirts of the capital, Tripoli, and its environs.

Professor Sharif Driss, professor of political science at the School of Journalism in Algiers, described his country's mission as “difficult”, and stated that “the Algerian approach needs an international framework and designing a solution that would be based on appointing a UN envoy and holding negotiations in a neighbouring country, because the Libyan file has become complicated by the multiplicity of actors in the crisis.”