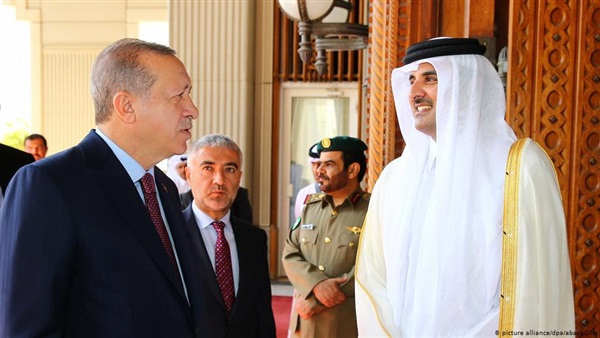 Relations between Qatar and Turkey progressed steadily ever since Qatar allowed Turkey to establish permanent military, political and economic presence in it.

This came hard on the heels of the eruption of the Gulf crisis, precipitated by Qatar's sponsorship of terrorism and terrorist groups and its interference in the affairs of Arab states.

The July 2 visit to Doha was Erdoğan's first since the outbreak of Covid-19 in his country.

The visit also gives insights into the nature of relations between Ankara and Doha. It comes as the two capitals run into one crisis after another. Turkey suffers tough economic and political crises. It has problems in its relations with other countries as well.

The two sides signed a number of agreements and memorandums of understanding during the visit. These agreements included amendments to a previous agreement between the two states on currency swap.

The Qatar Financial Center Authority and the financing office of the Turkish presidency signed a memorandum of understanding on industrial and technological cooperation.

The Qatari Investment Promotion Agency signed another memorandum of understanding with the investment office of the Turkish presidency on civil planning.

Qatar and Turkey also agreed to establish an agency with the aim of facilitating trade and boosting consumer protection.

In December 2014, the two countries agreed to establish a higher committee on strategic cooperation. The committee contains as members a number of ministries and institutions from the two countries. It aims to enhance common understanding between Qatar and Turkey.

The office was instrumental in Qatar's decision to pump about $15 billion in Turkey to prop up the country's currency in the face of the economic sanctions imposed on it by the United States.

Germany to Russia: we will protect our people, online and off