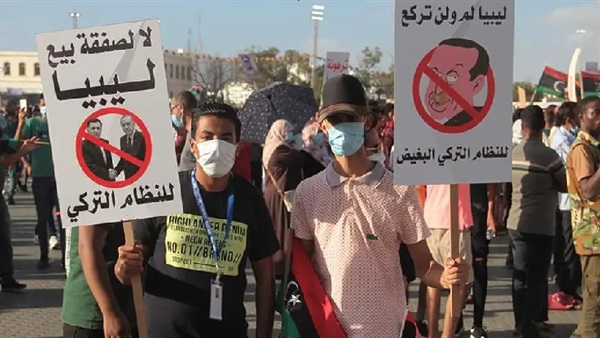 Public anger is raging in Libya against the Turkish occupation. On July 5, hundreds gathered in a massive demonstration in Benghazi’s Kish Square to protest Turkey’s interference in the country and to confirm their support for Field Marshal Khalifa Haftar’s Libyan National Army (LNA) to continue military operations against the occupier.

The demonstrators carried banners and chanted slogans denouncing Turkey and its presence in Libya and demanding that Ankara not deal with their country as an Ottoman state. They also chanted against Fayez al-Sarraj’s Government of National Accord (GNA) because of its relations with Turkey.

The Libyans chants carried a clear message of support for the LNA to work militarily to expel the terrorist and mercenary militias sent by Turkey.

The protest captured the attention of Libyan politicians and media, who consider it a clear message in rejection of the Turkish presence in Libya. MP Saeed Amogheb stressed on his Facebook page that the Libyan people completely denounce the Turkish invaders.

Army and people together

On the military side, LNA spokesman Brigadier Khaled al-Mahjoub announced on July 5 that the Libyan Air Force attacked nine Turkish targets at the Watiya airbase in the west of the country.

Mahjoub stated that the strikes successfully hit 80% of the targets, managing to kill dozens of militants, including a senior Turkish military commander and some Turkish military personnel who were working at the base.

Injured Turkish soldiers were transferred to Tripoli, he said, stressing that the LNA will not allow Turkish President Recep Tayyip Erdogan to win the battle in Libya.

Implications of the strike

The strike on the airbase, which is close to the Tunisian border, came just hours after Turkish Defense Minister Hulusi Akar visited Libya and inspected the GNA forces composed of terrorist militias and mercenaries.

This sent an important military and political message to Ankara that the LNA rejects the Turkish presence in the country and that Turkey will not be allowed to continue its interference. Additionally, the targeting of some of Erdogan's forces and destroying the air defense systems brought to the base just a few hours after Akar had said Turkey will remain in Libya forever Indicates that the LNA and Libyan people are adamant to fight against a colonial takeover of their country.

Brigadier Samir Ragheb, director of the Arab Foundation for Strategic Studies, said in a statement that the planes used to carry out the strike were likely Russian MiG or French Rafale jets, stressing that they have succeeded in achieving their goals and destroying the Turkish-supplied air defense system at the base.

Meanwhile, the recognition of the strike by Turkey’s Anadolu Agency silenced the media outlets that had been saying it was just a psychological war, Regheb said, adding that the strike likely will prevent Turkey from using its aircraft in the future to control the region.