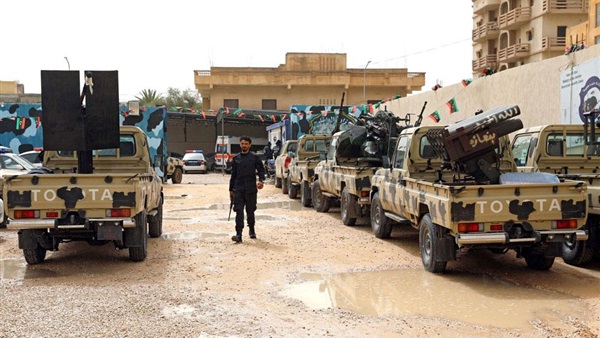 The proposed project of creating a “national guard” in Libya is once again at the centre of controversy. The project was promoted by the Tripoli government to circumvent regional and international demands, especially American calls for the disbanding and dismantling of the militias in Libya.

Implementing the idea, however, is easier said than done since militia leaders have sharp differences in positions and do not hesitate to vilify and accuse each other of treason. There are indications that the militias are unhappy with and preparing to resist Interior Minister Fathi Bashagha’s approach to choosing militias that will join this new security apparatus based on classifying the various militias as either “halal or haram.”

It is expected that Bashagha, who is affiliated with the Muslim Brotherhood, will take advantage of this opportunity to get rid of militias that stand in the way of tightening his grip and the grip of his hometown Misrata on the gears and cogs of the state. At the top of the troublesome militias for Bashagha are the Tripoli militias and, to a lesser extent, the Zawiya and Zintan militias.

It also seems that Turkey has opted to stir up the controversy created by the project of a “national guard.”

In a recent report titled “The Libyan National Guard … a necessary choice,” the official Turkish news agency, Anadolu, brought the subject back to the fore and tried to find justifications for it. This is in tune with Turkey’s aggressive goals and the Muslim Brotherhood’s agenda in the region.

Refocusing on the subject at this particular time does not seem isolated from the general state of hysteria that has gripped Turkey following the destruction of its air defences and military equipment at the al-Watiya base southwest of Tripoli. It is, in fact, rather closely connected to it, as Ankara is trying to first, divert attention from its losses in al-Watiya, second, please the Americans and third, accelerate the approval of its project in order to clinch the deal of creating, training and arming the new-born apparatus, which is worth billions of dollars.

In its report, Anadolu said that “the demobilisation, dismantling and reintegration of the militias, is an American plan to rebuild the Libyan army, but it is a necessary step to move from the stage of the revolution to the stage of state-building.”

But what the news agency seemed to intentionally and conveniently ignore in its report is the fact that Turkey would be the biggest beneficiary of the creation of the new security apparatus in Libya, not only as a cover for its continued military presence in Libya but also to overturn the balances of military forces throughout Libya.

Observers believe that pushing this project to the forefront again does not deviate from the context of the manoeuvres aimed at rearranging the security and military conditions in western Libya towards drawing new equations that enable the militias loyal to the Turkey-backed Tripoli government (the Government of National Accord) to dispose of tools and mechanisms with which they can meet the upcoming challenges in Libya.

This new National Guard apparatus would be a reproduction of Turkey’s own Gendarmerie corps that President Recep Tayyip Erdogan turned into the stick with which he continues to beat his political opponents.

In this context, the head of the Defence and National Security Committee at the former Libyan National Congress, Abdel Moneim al-Yassir, considered in media statements that the National Guard that the GNA wants to establish is nothing less than “a demonic terrorist tool that Turkey and the Brotherhood will use to destroy the entire region.”

He warned that “the Turkish coloniser did not come to Libya alone, but rather with a conspiracy, and what is happening now is to open the way for the Muslim Brotherhood and Turkey to be in North Africa for greater goals than just controlling Libya,” calling at the same time on the leaders of the armed groups and militias in Tripoli to wake up before it is too late.

This warning reflects the magnitude of the danger felt by the Libyans as a result of this project, which aims to provide legal cover for the militias, in order to keep them as a card and a tool for sabotage in the service of Turkish agendas in the region, by merging them into one body parallel to the Libyan army.

Early this month, Mohamed Ali al-Mahdi al-Sharif, chief of the general staff of the GNA-affiliated forces, submitted a memorandum to Prime Minister Fayez al-Sarraj suggesting the creation of a “national guard” that would be based in Tripoli and headed by an officer with the rank of colonel or above.

This memorandum came in the wake of work by the committee formed by Sarraj tasked with preparing a comprehensive vision to integrate the militias supporting his government, as part of his implementation of the American guidelines he received during his meeting at Zuwara with General Stephen Townsend, commander of the US Africa Command (AFRICOM), and US Ambassador to Libya Richard Norland.

Bashagha took charge of implementing the project. Before that and on May 20, Bashagha had addressed a memo to the Governor of the Central Bank in Tripoli, Sadiq al-Kabir, asking him to stop dealing with some militia leaders and to freeze their assets and accounts. Following the move, it was leaked that Bashagha handed the Turks a list of 34 names of militia members in the cities of Tripoli, Zawiya and Sabratha that he wanted to get rid of.

These leaks sparked sharp disagreements within the militias, which escalated to the point of fire exchanges, while the militia leaders gathered in front of the central bank in downtown Tripoli at a time when Libyan security sources voiced their fears that the coming days would witness a dangerous escalation by the militias that might lead to assassinations.

Sources noted that some people in Tripoli close to Bashagha are circulating a list of names of dozens of militia members who are said to have been targeted for assassination. They also reported the arrest of dozens of members of the Tripoli Revolutionaries Battalion, led by Haitham al-Tajuri, who does not hide his differences with the Misrata militia and the Turkish military operations room.

Sources also pointed out that among the targeted armed groups there are the Nawasi Brigade, led by Mustafa Kaddour, accused by Bashagha of infiltrating the intelligence services and state institutions, and the Bab Tajura Brigade led by Al-Azhari Finan, and also the armed forces of the Central Security led by Abdul-Ghani al-Kikli, who is one of the most prominent warlords in Libya.