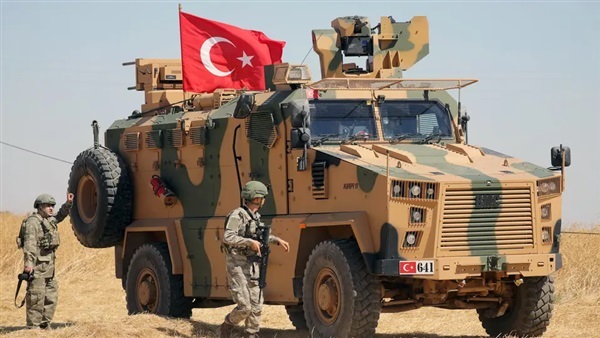 The disintegration and chaos that Syria has been witnessing for ten years opened the door for Turkish and Iranian encroachment. Iran has made an alliance with the regime of Syrian President Bashar Al Assad while Turkey has supported many currents of the Syrian opposition and fragmented armed factions.

While Iran’s agenda is more obvious, Turkey’s ambiguous agenda is more dangerous. Whatever the various Turkish parties’ differences are, the majority are in favour of restoring Turkish influence, which has been receding for more than a century.

Controlling water resources was especially important for Turkey. The 2019 Turkish offensive into north-eastern Syria, code-named Operation Peace Spring by the Turkish army, for example, created a military sector in the Ras Al-Ain region, taking over the waters of the Syrian island area controlled by the Kurdistan Workers’ Party (PKK).

Undeterred by the spreading coronavirus pandemic, Turkey rejected international appeals to resume the supply of water from the water pumping station in Alok near Ras al-Ain, which includes more than 450,000 Syrians, in north of Hasaka, in addition to three camps for the displaced.

According to Walid Haj Abdul Qadir, an opposition Syrian Kurd who now lives in Dubai, “the water card is not new (a new weapon) for Turkey as it (has played with it) many times, for example when Ankara swapped the former Syrian president Hafedh Al Assad, water for Abdullah Ocalan, leader of the PKK”.

He told The Arab Weekly that “Turkey had built many dams that make the Tigris River look like a small water stream and today came the role of the Euphrates”.

Following the same strategy, Turkey has continued to unfairly construct and manage dams on the Euphrates River, causing the Syrians’ share of the river to drop to less than 25% of the internationally agreed rate for the first time since the signing of the two international agreements in 1966 and 1997 between Turkey, Syria and Iraq.

The largest of these dams today are the Ataturk Dam in Urfa and the Ilisu Dam on the Tigris River that crosses Syrian territory on its way to Iraq. The latter has reduced the percentage of water in the Tigris by 60%.

Turkey’s agenda in Syria is not only economic. It has also sought to reshape the ethnic and sectarian demography through massacres and abuses allegedly carried out by Turkish-backed Syrian military factions, whether in Idlib or Afrin.

Among these armed rebel groups are the Sultan Murad Brigade, which was formed in early 2013. It has been accused of vicious crimes, including the kidnapping of women and children.

Sultan Murad includes foreign fighters, including European citizens, whom Turkey pushed to fight in Syria under the jihadist flag.

Turkey opened its borders with Syria to allow the flow of extremists and jihadists from all parts of the world. It was this broad passage that ISIS infiltrated to establish “the caliphate”.

The Turkish-Syrian border also served as a passage for many extremist groups that created terrorist outposts in north Syria, like the Al-Nusra-Al Qaeda Front, led by al-Golani, who operates openly under Turkish eyes in Idlib, which is largely controlled by Turkish intelligence.

Many have accused Ankara of investing in these groups and turning them into playing cards with the countries concerned about the Syrian file.

Turkish President Recep Tayyip Erdogan even threatened to open up the borders to Syrian refugees during the “spring of peace” process, allowing them to cross into the European Union. In doing so, he effectively turned the Syrian file into a blackmail tool against the West for political gain.

Turkey has also exploited Syrians by recruiting them to fight in Libya, another country in which it is seeking to expand its influence.

“The Muslim Brotherhood are responsible for sending Syrians to fight in Libya”, said Abdul Qadir, noting that “they turn the Syrians into slaves in exchange for the illusions of the return of the Ottoman Empire and the caliphate”.

“As a Syrian citizen, I realise that Turkey dreams of recovering the states of Aleppo and Mosul, and until this goal is achieved, it focuses on certain goals, such as oil and gas, the vitality of the region, and the whole range of issues that can play by them with Europe”, he added.

Some Syrians complain that Turkey is exerting pressure on refugees residing on its land and those who live in the northern regions, to push them to go to Libya in return for small amounts of money.

“We, Kurds and Arabs should stand against this investment, which is a crime no less than human trafficking”, Abdul Qadir stressed.

According to Abdul Qadir, what is happening in northern Syria, the Kurdish regions and elsewhere, is similar to what took place with the Ottoman Janissary army, which carried out crimes of theft, looting and kidnapping, including in Amad, Diyarbakir and Nusaybin.

“We have serious doubts about terrorist bombings that take place inside the areas of Turkish influence, which may be planned by the Turkish intelligence itself to keep the region in a state of tension and chaos”, he noted.