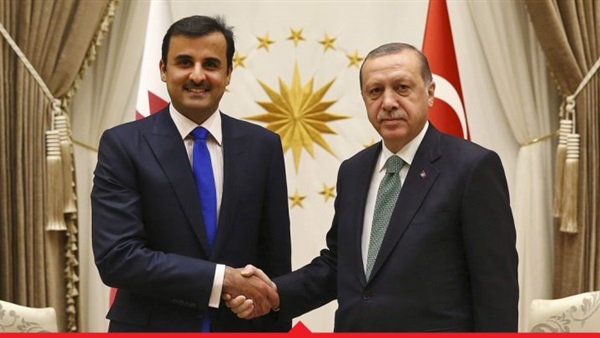 Turkish President Recep Tayyip Erdogan concluded his visit to Doha on Thursday, July 2 to meet the Qatari Emir Tamim bin Hamad in light of Turkey’s continued interference in Arab countries like Libya, Syria and Iraq. Ankara is searching for financial support to fund its military operations and recruit new mercenaries, as the stock of Syrian mercenaries has run out, especially from al-Qaeda and militant groups in Africa’s Sahel and Sahara region, as well as the Chadian opposition fighting alongside the Tripoli militias.

The Qatar News Agency (QNA) reported that both sides discussed relations between the two countries and ways to support and enhance them in various fields. The two leaders also discussed the most important developments in Palestine, Libya, Syria and Yemen.

The situation in Libya came at the top of issues discussed during the meeting, including the Turkish-Qatari cooperation to continue the Brotherhood-affiliated Government of National Accord’s (GNA) control of affairs in Tripoli, plundering Libya’s wealth, and threatening Egypt and other neighboring countries.

In light of the decrease in the number of Syrian mercenaries transported by Turkey from Idlib and Aleppo to Tripoli, after it had previously flown about 1,000 mercenaries, the latest flight of Syrian mercenaries was less than 200, as the Syrians are refusing to fight in Libya due to the high death among them while fighting the Libyan National Army (LNA).

Libyan sources warned that Turkey was taking advantage of the undeclared ceasefire phase after Egyptian President Abdel Fattah al-Sisi announced that Sirte and al-Jafra were a red line not to be crossed by those supporting the GNA and Brotherhood militias.

The sources pointed out that Erdogan and Tamim discussed supporting the GNA militias with more mercenaries in preparation for upcoming battles in Libya and to compensate for the losses that occurred in recent weeks.

They also pointed out that the Turkish intelligence services demanded that the Qatari regime activate its relations with the Chadian opposition and militants in the Sahel and Sahara region, especially from Mali, to support the militias in Tripoli.

The Chadian militias are allied with al-Qaeda, as well as Ibrahim Jadhran’s militia and other militants whose camps in the mountains and valleys near Beni Walid were bombed a week ago by the LNA.

Libyan sources confirmed that Turkey and Qatar are preparing to fight battles against the LNA in southern and central Libya in order to exhaust Field Marshal Khalifa Haftar’s forces by using Chadian mercenaries and militants from Mali, in addition to some local militias.

Qatar has extensive relations with the Chadian opposition and terrorist groups in the Sahel and Sahara region. The Chadian mercenaries are made up of elements of the Movement for Democracy and Justice in Chad (MDJT) who moved to work in southern Libya as activists claiming to be Libyan, along with the Union of Forces for Democracy and Development (UFDD) in Chad, which is led by General Mahamat Nouri, a famous Chadian opposition leader who almost seized the capital N'Djamena in 1998.

Most of the Chadian opposition claim to be from the Toubbou tribe that extends to southern Libya in order to justify their presence, and there were reports that the GNA supported their movements under the political cover of the Southern Protection Forces led by Hassan Mousa al-Tabbawi, but they assaulted and displaced civilians.

African Sahel countries, including Burkina Faso, Mali, Mauritania, Niger and Chad, are also witnessing Turkish and Qatar activity under the guise of cooperation and support, while their relationships are actually with militant and rebel groups.

Intelligence reports have monitored the Qatari and Turkish penetration of the Sahel region and their relationship with the Macina Liberation Front, which has been responsible for much of the terrorist attacks and strife in the Sahel and Sahara.

In June 2012, the French weekly Le Canard Enchaîné revealed that Qatari funds were secretly sent to armed groups that had seized northern Mali since mid-March 2012 and declared an Islamist republic. The international community objected and France intervened militarily to stop the terrorists, especially Ansar al-Dine and the Movement for Unity and Jihad in West Africa (MUJAO), which was behind the kidnapping of seven Algerian diplomats in the Malian city of Gao.

The French weekly published an article entitled "Our friend in Qatar finances the militants of Mali", which stated that the French military intelligence was aware that armed groups operating in northern Mali had received financial support from Qatar for their activities in Mali, stressing that Doha’s emir funded armed groups to establish an Islamist state on the border with Algeria and to carry out terrorist activities within the territory of this neighboring country and in the Sahel region.

French intelligence sources confirmed that "according to information from the Military Intelligence Service, Tuareg rebels in the National Movement for the Liberation of Azawad (MNLA), Ansar al-Dine, al-Qaeda in the Islamic Maghreb (AQIM), and other militant movements may have received financial support from Qatar. It is clear that the kidnapping of foreigners and smuggling of drugs and cigarettes is not enough to fill the needed expenditures of militant groups."

The newspaper had previously revealed on March 26, 2011 that Qatar was financing militant groups in the Horn of Africa and the African Sahel region. Military intelligence confirmed that this vast region was a "new haven for terrorism", pointing out that this development should not be surprising.

On December 25, 2019, officials in Niger announced the arrest of a three terrorists, two of whom had Turkish citizenship, in addition to a local collaborator from Niger.

Goa Mayor Sadou Diallo has also accused Qatar’s emir of financing terrorists through the airports of Gao and Timbuktu under the guise of humanitarian and food aid.

Mesmari said during a press conference in February 2019 that Chadian rebel leader Timan Erdimi is leading the military operations in southern Libya with support from Qatar.