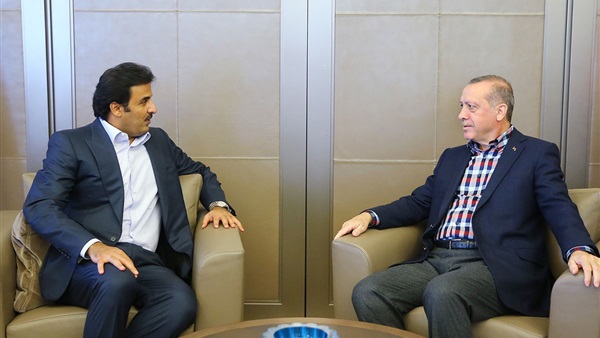 In the wake of the unprecedented acceleration in the number of new corona virus infections as a result of the failed policies of Qatari Emir Tamim bin Hamad Al Thani and Turkish President Recep Tayyip Erdogan, and despite international warnings against travel due to the pandemic, Erdogan decided to break the health precautions and visit Doha to meet Tamim. The visit coincides with the continued crimes committed by Turkish forces and Erdogan's mercenaries in Libya, Syria and Iraq.

According to informed sources, Erdogan is searching for funds to finance his military operations in Syria, Iraq and Libya, in addition to his country’s economy, which collapsed from the pandemic.

Taha wrote on his Twitter account on Wednesday, July 1 Doha would be completely closed and tight security measures put in place by Turkish military for Erdogan’s arrival in Qatar, where he would meet Qatari regime officials and immediately take $5 billion and sign agreements to support the militias in Libya and Syria and to form an operations and media room to manage the affairs of the terrorists in Tripoli.

He added that Tamim will sign economic, security, military and media agreements with Erdogan, funding for the Turkish regime with $5 billion to support terrorist militias in Libya and Syria, as well as expand the work of the Turkish military base in Doha. Erdogan will also meet a number of Houthi and Brotherhood leaders from Yemen.

According to media reports, the Turkish president is facing several domestic crises related to a huge shortage in the budget, which he illegally consumed for his foreign wars, as well as the economic repercussions of the corona pandemic. Those problems manifested strongly with the opposition's insistence on knowing the fate of billions of pounds collected to counter the pandemic.

However, Qatar is no better condition than Turkey. According to a previous report by Qatarileaks, Doha has sustained losses for the past three years since the Arab Quartet began its boycott due to Qatar’s funding and support for terrorism, and Turkey and Iran then took advantage of the situation to drain the country’s resources. At the same time, Qatar has failed to garner political support on the international level, and its foreign debt has increased to more than 25%, while its total public debt has reached more than half a trillion riyals. These losses pushed the Qatari regime to depend on Turkey and Iran, so Tamim supported the Turkish lira with more than $25 billion, equivalent to half of Doha’s budget for this year.

Qatar's losses from the Arab boycott have not been confined to the economic side only, but were also reflected on the political level, as Doha is experiencing a state of increasing regional isolation, which was clearly demonstrated in Doha’s lack of political representation in the Arab world and internationally. The Arab boycott has also reduced foreign investment in Qatar, especially since most of its investors were from Gulf Cooperation Council (GCC) countries. Private deposits have decreased by $40 billion.

Former Qatari Prime Minister Hamad bin Jassim bin Jabr Al Thani recently revealed on Twitter that his country fears of the American base located there, which protects Tamim both at home and abroad, warning of the new US policy that seems to favor reducing its military presence around the world.

The former prime minister asserted that the United States would lose its global military power, which had provided it many direct and indirect economic and financial advantages. He added that countries like China, Russia and India will likely fill this void in the future.

Observers believe that Hamad bin Jassim’s statements seem to have come at an appropriate time for Erdogan, allowing him to increase his extortion of Tamim through the portal of Turkish military bases in Qatar to protect the emir from threats both inside and outside his country, especially with increasing information about popular discontent in Doha and the frustration of several military coup attempts.