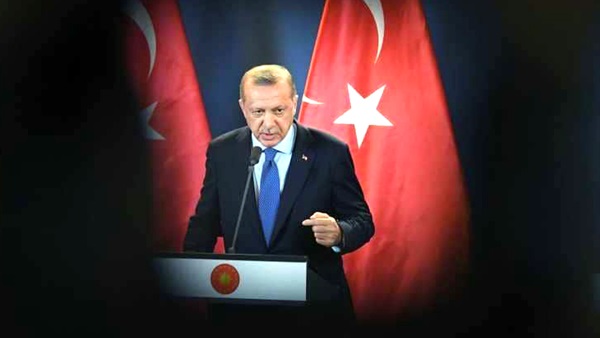 In light of the situation in Libya and the struggle of the armed militias loyal to the Government of National Accord (GNA) to survive, ISIS is heading to establish its presence in western Libya under the supervision of Turkey, which had previously sent terrorist mercenaries from Syria to Libya to fight alongside the GNA.

ISIS took advantage of the conflict between the GNA militias to establish its presence in western Libya, especially in the Sabratha area located 80 km to the west of the capital Tripoli, where it once again occupied the Baraem camp, where ISIS members raised the black flags of the terrorist organization to confirm their presence in the city, which had previously been seized by ISIS in 2015 before being liberated in 2017.

ISIS terrorists move freely between Libya’s western cities, such as Zawiya, Sorman, Sabratah, Zawara, Tripoli and the western mountains region, under the protection of Turkish President Recep Tayyip Erdogan, who gave ISIS a green light to sow its terrorist activity in western Libya. But this situation poses a threat to its neighbors, especially Tunisia and Algeria, as well as to European countries, whose media outlets have begun to address the risks of terrorism from western Libya on their security and stability.

According to MP Ali al-Takbali, member of the parliament’s Defense and National Security Committee, ISIS began spreading throughout Tripoli and other western cities, with plans to announce the emirate soon. The region has turned into a gathering spot for ISIS members of different nationalities, including those sent by the Turkish regime from northern Syria, whether Syrians or other nationalities. They were joined by the remnants of the organization in Libya who were fighting alongside the GNA forces against the Libyan National Army (LNA) or were wandering in the desert after being expelled from the country’s east. They are currently training in the Baraem camp in Sabratha.

The American think tank Gatestone Institute released a report at the end of December 2019, confirming that the political instability in Libya is giving way for ISIS to reorganize its ranks, while the sending of Turkish forces contributes to complicating the situation there. The report stressed that Libya is now one of the main hubs for future ISIS operations, serving as compensation for the organization’s loss of land in Syria and Iraq, and ISIS funds its activities through theft and kidnappings for ransom by blackmailing Libyans and smuggling artifacts and other goods across the border.

Meanwhile, Erdogan is using the card of ISIS in Libya to ensure his own presence there as much as possible. The Syrian Observatory for Human Rights revealed that approximately 28 terrorists from Syria joined mercenaries in Libya, especially members of Hayat Tahrir al-Sham and ISIS, and they were flown by air to Libyan territory to support the armed militias deployed in the capital and to take advantage of the armed conflict. So ISIS’s presence in western Libya comes under the supervision of Turkey and Tripoli.

The process of sending Turkish-backed Syrian elements to Libya opened the door for ISIS to establish its presence in the country. LNA spokesman Major General Ahmed al-Mesmari had confirmed in December 2019 that Turkish intelligence was transporting hundreds of the most dangerous ISIS, al-Qaeda and HTS terrorists from Syria to Libya via Tunisia’s Djerba Airport and Libya’s Misrata and Zuwara airports, as well as the western mountains.