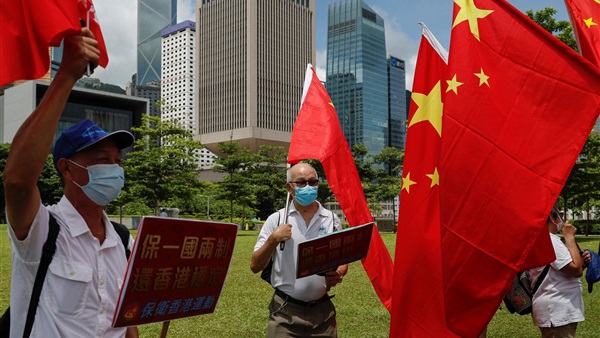 Hong Kong activists have deleted social media profiles and closed down campaign groups after Beijing passed a new security law for the territory that many fear could land them in jail.

The standing committee of the National People’s Congress approved the measure on Tuesday morning and it will be enacted in Hong Kong on Wednesday, on the 23rd anniversary of its return to Chinese rule.

The legislation, aimed at stamping out the often violent anti-government protests that have engulfed Hong Kong over the past year, will criminalise secession, subversion, terrorism and collusion with foreign forces.

The full text of the law has not yet been released, but the public broadcaster RTHK quoted sources as saying that under “special circumstances”, Hong Kong’s top leader and the Beijing-led national security agency in Hong Kong could send “serious” national security cases to mainland Chinese courts to be tried.

High-profile activists Joshua Wong, Nathan Law and Agnes Chow resigned from their political group, Demosisto, and the group itself announced its closure hours after news of the law’s passage. Hong Kong National Front, a pro-independence group, also announced its closure, but said its work would continue in Taiwan and the UK. Another pro-independence group, Studentlocalism, also said it would cease operating.

Local reports say the penalties for national security crimes will range from three to 10 years in prison, with life imprisonment for “serious cases”. The law is not supposed to be applied retroactively, although the acts that have “endangered the state” in the past two years could be used as evidence in courts, they say.

Although reports say China would exercise jurisdiction in only a minority of “serious” national security cases the Hong Kong government is unable to handle, many Hong Kongers were not reassured.

“It’s all so vague. Whatever they say about this targeting only a few people, I cannot trust them,” said Marie Tsang.

“I feel very uncomfortable because you don’t know where the red line is, you don’t know what they mean by national security crimes so you just second-guess,” said Tsang, who said she has deleted many of her photos and posts online and is seeking to emigrate.

A student who identified himself as Kelvin, said he found the law “unnecessary” and “disturbing”.

“Many things in this law are open to interpretation. The authorities get to pick judges and how they interpret things will become precedents in courts,” said the 27-year-old, who said he was also deleting photos and posts online.

Some activists showed defiance by staging a lunchtime protest in a shopping centre in the prestigious Central business district. Several people sang songs and chanted slogansn. Some displayed pro-independence flags and held up posters opposing the national security law, and urged people to take part in a protest on 1 July. A large number of police officers conducted searches on some of them.

Some hope the security law will put an end to the protests. A 70-year-old market stall owner who identified herself as Mrs Ha said heavier punishment was needed to stop “the rioters from wrecking Hong Kong”.

“It will scare people and they won’t cause chaos any more,” she said.

Ip Kwok-him, a Hong Kong deputy to the Chinese parliament National People’s Congress, said the law was not “a toothless tiger” and would have a “deterrent effect”.