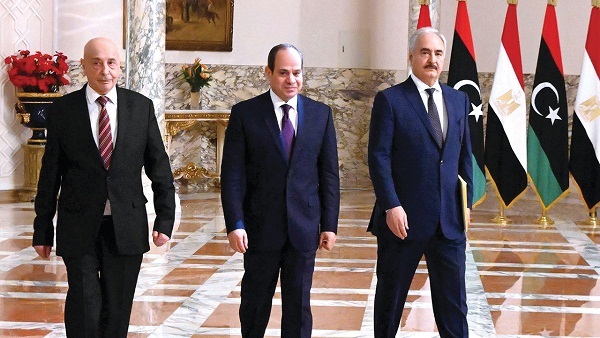 There have been serious Arab and international efforts to lay the foundations of peace in Libya by supporting the ceasefire initiative launched by Egyptian President Abdel Fattah al-Sisi earlier this month, which was welcomed by the Libyan National Army (LNA) but rejected by the Brotherhood-affiliated Government of National Accord (GNA), led by Fayez al-Sarraj, and its ally Turkey, who cling to the military solution by paying Syrian mercenaries to carry out more terrorist operations.

After Sisi’s initiative to stop military operations in Libya, the GNA announced the launch of a military operation on the city of Sirte, which is under the control of the LNA, in a step that shows Sarraj and his terrorist militias adhere to a military solution amid broad international calls for a return to peaceful negotiations to end the conflict.

The International Follow-up Committee on Libya (IFCL) held its third meeting at the level of senior officials on Monday, June 22. The meeting was co-chaired by the League of Arab States, represented by Assistant Secretary-General Hossam Zaki, and the United Nations Support Mission in Libya, represented by Special Representative Stephanie Williams.

The committee issued a statement consisting of 13 items, calling for the necessity of the parties in the Libyan conflict to adhere to the decisions of the Berlin Summit held on January 19 and to conduct negotiations that lead to a comprehensive settlement preserving Libya's peace and sovereignty.

The committee members demanded an immediate cessation of hostilities and the completion of existing peaceful negotiations within the framework of the 5+5 Joint Military Committee. They also called for the necessity of removing the mercenaries sent by Turkey following the signing of the security agreement between Sarraj and Turkish President Recep Tayyip Erdogan, which Turkey used to intervene militarily, adding fuel to the war in Libya and undermining the painstaking peace efforts.

The statement also called for the withdrawal of all foreign military forces and the dismantling and disarmament of armed terrorist groups.

The continued violation of the UN arms embargo on Libya was denounced by the committee, as Ankara continues to support the Sarraj government with military equipment and armed militants, and they called on parties to adhere to the Egyptian initiative to end the war and bloodshed and to prepare for national elections.

The statement also urged the Libyan parties to adhere to the peaceful political dialogue that was launched in Geneva in February, noting the importance of the elections to complete the political transition in Libya.

The committee expressed its readiness to support a peaceful democratic path, which can only be achieved in a secure and enabling political environment.

The members of the committee expressed their concern about the deteriorating humanitarian and economic conditions in the country, especially with the continued spread of the corona virus, which is threatening the lives of Libyans in light of the country’s fragile health sector.

The need to resume oil production under the supervision of the National Oil Corporation was also stressed by the committee members, who renewed their demand for transparent and equitable distribution of resources, stressing the importance of Libya’s sovereign institutions restoring their integrity.

Meanwhile, the European Union deliberated on Monday, June 22 over Turkey’s use of forceful language and its continued transfer of thousands of mercenaries to Libya.

EU High Representative for Foreign and Security Policy Josep Borrell called for a ceasefire between the Libyan parties, as well as the resumption of the 5+5 talks. He also considered that the EU is confronted by a new Astana track between Russia and Turkey, in Libya this time, as both countries share interests there.

The EU stressed the need to strengthen Europe’s military presence in Africa’s Sahel region in order to protect European security.