MB members in Germany are masters of disguise 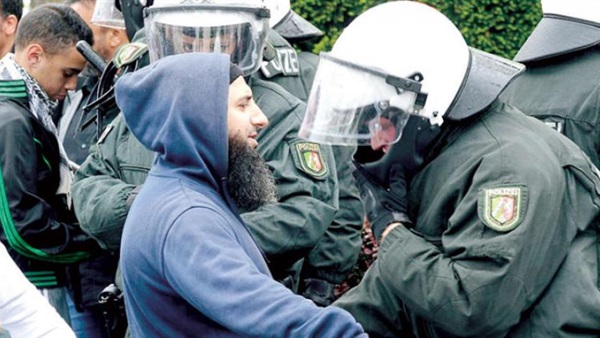 Although the Muslim Brotherhood's presence in Germany was a result of World War II as Germans wanted to face communism with Islam, the 1950s witnessed migrations due to the crackdown in Egypt after the Brotherhood was charged with attempting to assassinate late president Gamal Abdel Nasser in 1954.

The Brotherhood exploited the enmity between Nasser and some of the Western countries, which shared with the radical Islamists hate to the socialist orientation of Nasser.

Adolph Hitler wanted to use the misinterpreted Islam to combat communism. Indian imam Sadr-ud-Din established in 1922 a league of Muslims in Germany.

During the World War II, the Nazis used the misinterpreted Islam against communism and the Soviet Union. A mosque was built in Munich, Germany's third largest cities. This mosque would be later used by the Brotherhood to penetrate the German society.

Sheikh Amin al-Husseiny, former Grand Mufti of Jerusalem, played a leading role in recruiting thousands of young people from the Balkan countries (Albania, Kosovo and Herzegovina). The Munich mosque has become the headquarters for the Brotherhood's international organization.

The Brotherhood used a number of entities through one single umbrella. After the collapse of Nazis, the Brotherhood took advantage of the new developments in the 1950s.

The Brotherhood's strategy took advantage of three entities in Germany: Central Council of Muslims, the Muslim Foundation and Milli Gorus, which represents many of the Turkish community in Germany.

Researcher Guido Steinberg said in his book "The West and the Muslim Brotherhood after the Arab Spring" that the Brotherhood's approach is double-faced.

The Brotherhood's approach is double-faced. While the Brotherhood embraces principles which totally contradict the western democratic values. It rejects a secular state and provides a political cover for violence and terrorism in the Arab world.

The Brotherhood releases statements gloating over terrorist attacks in Egypt to influence the public opinion in Germany. At the same time, the Brotherhood dismisses it poses any threats to Europe.

Moreover, the Brotherhood has created an economic empire and social links in Germany through offshore companies away from restrictive control and taxes.

Germany has not been away from the terror that hit Europe, analysts said citing its engagement in the Middle Eastern politics. Europe has witnessed a series of bombings over the past years.

On July 24, 2016, a man wounded 15 in a bar in Ansbach in southern Germany. The attacker, who pledged allegiance to Abu Bakr al-Baghdadi, leader of ISIS, was killed. The attack followed three others within one week.

Researcher Susanne Schröter of the Frankfurt Research Center on Global Islam says that the Muslim Brotherhood are the masters of disguise regarding their organizational activities and political goals.

"They [the Brotherhood] become more transparent about their goals as their political status improves but purport themselves as tolerant moderates when they are in the minority, as they are in German society," she said.

Therefore, the future of the Brotherhood in Germany will depend on the organization's ability to adapt with new developments facing the decision-makers in general. Growing violence, the Brotherhood's economic network and the crackdown on the Brotherhood by a number of states like Bavaria, Saxony and North Rhine-Westphalia.

It is expected that pressures and crackdown on the pro-Brotherhood organizations will increase. That coincides with Egypt's efforts to bolster ties with Germany after the June 30 Revolution.