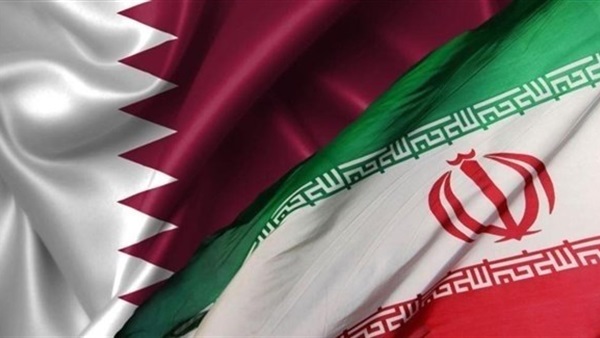 In June 2017, the Arab boycott of Qatar, in support of terrorism, revealed the strong relations between the Hamdin regime and the regime of the Supreme Leader Ali Khamenei in Iran, by opening the doors of Doha to the Iranian Revolutionary Guard.

Egypt, Saudi Arabia, the UAE and Bahrain announced the severing of diplomatic relations with Qatar on June 5, 2017, due to its support for terrorism. Qatar rushed to embrace Iran and Turkey, which for decades pose a threat lurking in the Gulf region in particular and the Arab region in general within the expansion ambitions governed by expansionist ambitions and ideological agendas.

And the Qatari moves in the region, since the discovery of its agenda following the announcement of a boycott by the Arab countries calling for combating terrorism, indicate the depth of relations with Iran and its militias.

With the beginning of the Gulf crisis, Iran opened its airspace to aircraft crossing to and from Qatar, and prepared its seaports - especially Bushehr Port - in order to restore commercial relations with Qatar to normal.

For its part, Qatar opened its maritime borders to the Iranian border guards to move freely from any restrictions, after the Hamdine and Faghih states signed a border memorandum of understanding between them, August 2019.

Also, Qatar, through Abdulaziz Al-Muhannadi, head of the Qatari Coast Security Department, also announced the launch of a port for Iranian ships, in addition to providing financial services to Iranian merchants inside its territories despite the US sanctions imposed on Tehran.

Qatar granted a military presence to the Iranian Revolutionary Guard and opened the country to Iranian intelligence, and in December 2019, the commander of the navy in the Iranian army, Hussein Khanzadi, discussed with his Qatari counterpart the renewal of military understandings between the two countries, in a clear indication of the depth of security and military cooperation between Doha and Tehran despite threats The recent security of the neighboring countries.

The Fars News Agency, which is speaking for the Iranian Revolutionary Guards, stated that the meeting included a Qatari welcome for the presence of Iranian military naval vessels in Doha ports.

As well as inviting Qatari officers to visit the Command and Staff University of the Iranian army "Davos", in addition to taking advantage of what it described as Iran's high military training capabilities, as she put it.

The Gulf and Arab watchers do not forget what the Qatari Minister of State for Foreign Affairs, Sultan bin Saad Al-Muraikhi, said in the opening of the works of the regular 148th session of the Arab League Council, at the level of foreign ministers, in September of 2017, when Al-Muraikhi provoked the audience by saying that Iran is an honorable country, in The time when Iran was supporting the Houthi militia whose missiles target Makkah Al-Mukarramah, while Iranian militias are deployed in Syria, Iraq, and other areas.

Abdullah Sahrabi also revealed in an interview with the Iranian "Mashreq News" website, about Iran's penetration into vital centers and departments within Qatar, saying that "Iran is one of the biggest influencers in various sectors within Qatar, including technical and engineering services sectors such as human resources." He also revealed The ambassador on Qatar brought Iranian pilots to work on Qatar Airways, saying that "Doha gives appropriate salaries and gives them modern training and field work."

The Qatari opposition also indicated that the country's authorities have allowed entry of elements of the Lebanese Hezbollah, through the arrival of the Lebanese to the country without previous visas, all in order to integrate with the Iranian Revolutionary Guards in Doha to help the system. These reports added that the Qatari army is preparing to integrate these fighters from Hezbollah and the Revolutionary Guards into it, which was announced by the opposition later in its saying that many Iranians enter Qatar with Pakistani non-Iranian passports.

The American magazine "Forbes" also talked about the Revolutionary Guard's desire to participate in its infrastructure companies, such as the famous "Khatem al-Anbia" company, in the construction works of the World Cup in 2022 in Qatar.

The magazine pointed out that Iran, during a phone call between Iranian President Hassan Rouhani and the Emir of Qatar, Tamim bin Hamad in August 2018, announced her desire to obtain shares in infrastructure work in the facilities that will witness the activities of the World Cup for the year 2022, indicating that companies His country is "fully prepared" to participate in these construction works.

Tehran is counting on a Qatari role to mediate in front of the international community and open communication channels, and Western reports revealed that Rouhani demanded Sheikh Tamim to mediate with Qatar in Western countries to stop the escalating campaign and help Iran to pay compensation for the downing of the Ukrainian plane, as a kind of Gemayel's response to Tehran on its supportive stance in its crisis With the states of the province.

“May there is no wisdom in the Arab hostility towards Iran,” Prince Tamim was quoted as saying by Qatar News Agency on May 24, 2017. This led to an angry response from Riyadh and Abu Dhabi, which Qatar replied by claiming that its official news agency website had been hacked and that the report was false. This excuse was met with suspicion and skepticism by Saudi Arabia and the UAE, which blocked the Qatari sites, which is what Egypt and Bahrain did.

Tamim's first official visit to the Iranian capital, Tehran, came a few days after the commander of the Quds Force, the outer arm of the Iranian Revolutionary Guard militia, Qassem Soleimani, was killed after a raid by a US plane that targeted his motorcade near Baghdad airport in Iraq to put an end to the head of Iran's terrorist spear.

The visit, which was reported by various media outlets, to Qatar providing $ 3 billion to Iran as a ransom after the killing of Quds Force commander Qasim Soleimani.

The pioneers of "Twitter" circulated a statement to the former leader of the Iranian Revolutionary Guards, Hassan Abbasi, in which he says that Iran got $ 3 billion from Qatar after the killing of Quds Force commander Qassem Soleimani.

A platform of a major Qatari channel also caused anger through social media, after it broadcast a promotional video of an episode that deals with the personality of Qassem Soleimani, the former commander of the Iranian Revolutionary Guard Corps, who ran his country's terrorist militias in the Arab region - before he was killed in an American raid in Baghdad in Last January.

Iraqi journalist Sufyan al-Samarrai said in a tweet to him on Twitter: “Al-Jazeera is a platform for political and terrorist Islam. How many young people in the Arab world have killed and destroyed the future of the rest of them ?, And after you turned into a platform to recruit these gangs today, you are promoting and drumming to the largest criminal and homeless killer Millions because of the criminal corps he leads. "

Also, Syrian political activist Mohamed Sabra said: "Al-Jazeera Podcast has been transformed into a branch of the war media of the Revolutionary Guard terrorist militia, by glorifying the terrorist criminal Qassem Soleimani, the murderer of children in Syria and Iraq."

He continued: "It is a human and moral fall before it was a media fall ... Soleimani is a criminal and his glorification of this is a contempt for the blood of the Syrian martyrs."

In his report entitled "Iranian-Qatari Relations in the Past and Present," the Iranian-speaking "International Center for Peace Studies", speaking in Persian, shed light on Tehran's relations with Qatar through the Cooperation Council, which he said "Qatar was neutral throughout the Iran-Iraq war despite some of its political positions in The framework of the Cooperation Council and as a result of Saudi pressure, as it was providing Saddam Hussein's regime with some financial and propaganda assistance, but after Iraq’s invasion of Kuwait, ties were cut in August between countries of the region and Iraq, and on the other hand, relations between Qatar and Iran developed.

The site asserts that "Qatar is the only country in the region that in 1990 supported the implementation of the Algiers Agreement between Iran and Iraq."

University of Michigan professor of international relations Muhammad Ayoub, in an article for the Interst magazine, stated that Iran is the biggest beneficiary of the Gulf crisis, because it helped achieve a diplomatic victory for it through attempts to normalize relations with the Gulf countries, which started with Qatar.

The writer also pointed out that Iran's rapprochement with Qatar comes after improved relations between Iran and Turkey. After the Iranian vision coincided with the Turkish vision regarding the Bashar Al-Assad regime, the Qatari-Iranian relationship has improved, in a way that will necessarily affect Qatar's view of the Syrian crisis, due to its new alliance with Iran.