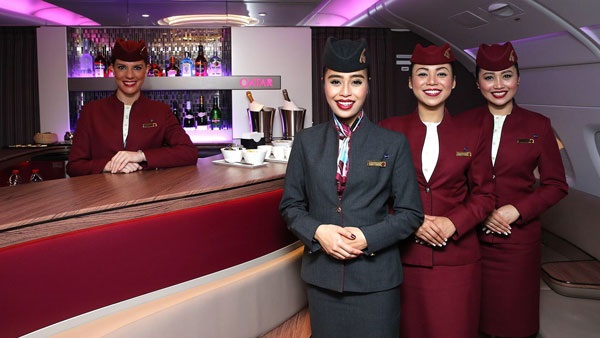 Reports stated that the Qatari official has repeatedly stressed his lack of respect for the rights and status of women, especially after saying earlier that "his company can only be run by men."

Of course, Al Baker said, "The company must be led by a man, because the management position is very challenging."

Reports indicated that the statements of the Qatari official are not the first that the CEO of Qatar Airways ignited the controversy, as last year he had to apologize "openly" for his description of American flight attendants as "grandmothers", and he said that the average age of his company’s crew is 26 years, which are statements She was considered abusive in terms of discrimination based on gender and age group.

She added that the Qatari official, Akbar Al-Baker, between the quality of service and the age of the flight attendants, aims to ensure that the job of the hostess is only to be beautiful, that is, if she loses her beauty, another must be replaced with her, and thus the hostess loses her job even if she is adept at performing her duties.

It is worth noting that the Qatar Airways has been preventing its hosts from conceiving or even marrying ... The International Labor Organization of the United Nations has always touched on the working conditions of women on Qatar Airways.

Last year, Al-Bakir sparked a wave of criticism and ridicule after he again made racist statements that underestimated women and their ability to work, and that reflected the trend of discrimination against them.

In a satirical commentary, the US "Bloomberg" agency said, "You women are looking for jobs elsewhere. Al-Baker says that only a man can rise to the level of his job challenges."

She noted that, moments after assuming the position of President of the International Air Transport Association (IATA), Al-Baker had done little to suggest that things would change.

This is not the first fall of Al-Baker because of his racist remarks. On July 12, 2017, American Airlines escalated the verbal battle with its Qatari counterpart, and strongly attacked the comments of the CEO of Middle East Airlines against American flight attendants, describing them as "gender-biased and age-based".

The mention of the Qatarelix website, which is affiliated with the Qatari opposition, was the result of imposing restrictions and laws that oppress women and incite violence against them. It was put in place by the regime of the Emir of Qatar, Tamim bin Hamad. Women continue to escape from Doha prisons abroad, until they find an outlet for them, which reveals the size of Violations by the Qatari regime against women in his country, and confirms that the Al-Hamdeen organization stands as an obstacle to Qatari women obtaining their rights.

The site affiliated with the Qatari opposition said that "Aisha Al-Qahtani" or as she calls herself "Salvador" the Qatari girl, caused a sensation within the Qatari society, after announcing her escape outside Doha to gain a degree of freedom, and fearing the spread of the phenomenon that threatens the stability of the Arab and Islamic society.

The Qatari opposition website added that in less than two months, two girls escaped due to the systematic repression against them, and Al-Qahtani, the Qatari girl, Nouf Al-Maadeed, who revealed her escape from Qatar because of the excessive laws in the oppression of women, escaped to settle in the British capital, London. Despite the Tamim government’s attempt to export a tolerant scene of women's rights and support them through leadership positions, the United Nations ranked in its 2019 annual report, Doha, as one of the countries oppressing women in general.