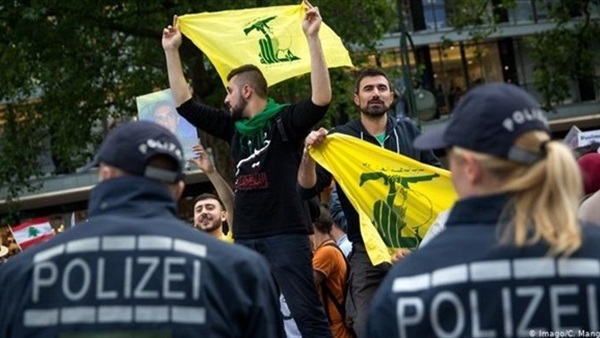 Hezbollah is facing new obstacles in Europe, as the Iranian-backed terrorist militia faces rejection and bans on the international scene.

The Lebanese Hezbollah faced a ban on its activities in Austria after the Austrian parliament on Saturday, May 30 issued new recommendations to stop the terrorist group’s activities in the country after launching calls for escalatory measures against it within the European Union.

The Austrian parliament approved a draft resolution banning Hezbollah activities in the country submitted by the ruling coalition parties, and the resolution stipulated that distinguishing between Hezbollah's military and political wings is unjustified, as Hezbollah is fully a terrorist organization.

The US State Department welcomed the Austrian decision, which will lead to curbing the Lebanese militia’s activities in the country. US State Department spokeswoman Morgan Ortagus said on Twitter, “We welcome the Austrian Parliament’s recognition of the threat that Hezbollah represents in Europe, and we call for taking additional steps against this terrorist agent of Iran.”

This decision came very shortly after Germany announced a complete ban on Hezbollah activities on its soil, while the Netherlands, Britain, the United States and Canada classified it as a terrorist organization, in a successful move to further curb Hezbollah's threat on Austria after the country's decision to ban the use of Hezbollah slogans or flags in March 2019.

On the other hand, a vigil in Beirut protested against the “Hezbollah state” and called for restricting arms to the Lebanese state. Lebanese activists gathered on Saturday, May 30 to demand the disarmament of the pro-Iranian Hezbollah militia, raising the slogan “No to a state within the state. No to illegal weapons.”

One of the protesters said, “For more than seven months, we have been going out with protest movements demanding to fight against corruption, but so far no progress has been made, because whoever protects this corruption is Hezbollah and its weapons, and all peoples of the world have the right to possess arms to resist the occupier but not to protect the corrupt. We want to build a homeland, but is it permissible for this weapon to protect corruption and smuggling through state facilities?”

The Austrian parliament's decision to curb the activities of the Lebanese Hezbollah militia in the country came at a significant time, meaning that perhaps there is European consensus to ban the group following Germany’s ban on it.

Dr. Tarek Fahmy, professor of political science at Cairo University, told the Reference that Austria's decision also invites other governments to limit Hezbollah's activities, and there are expectations that other countries will follow suit, especially since some members of the European Parliament began discussing this matter days before Austria’s ban.

Fahmy said that the US administration's proposals must be emphasized regarding the decision and its significance, as the repercussions of this decision on Hezbollah will be costly, especially following the German decision and the likelihood that the European Parliament and other countries could follow suit.

This is a very crucial stage that will have major repercussions on the expansion of Hezbollah's activities outside Europe and serves as an invitation for the decision to be repeated in a number of other countries, Fahmy noted. Hezbollah will not succeed in facing this matter, especially considering the existing evidence of its involvement in terrorist activities that strike at European stability, not only in Germany and Austria, but in most European countries.