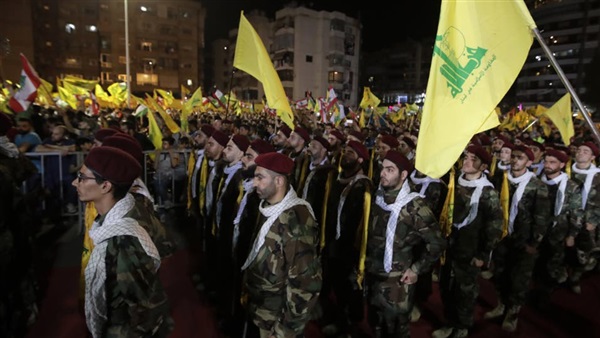 Hezbollah has received a new blow by the United Nations after it demanded the Iranian-backed Lebanese militia to disarm, which threatens the end of the party in Lebanon, especially since there is a wave of anger and a popular rejection of the policies of Hezbollah and its leader Hassan Nasrallah, with the Lebanese street demanding the militia be held accountable, raising the question about the fate of Hezbollah.

In a new escalation facing Hezbollah in Lebanon, UN Secretary-General Antonio Guterres invited the Lebanese government and army on May 14 to implement Resolution 1559, which stipulates Hezbollah’s disarmament.

Guterres urged the government and the Lebanese armed forces to take all necessary measures to prevent Hezbollah and other armed groups from obtaining weapons and building paramilitary capabilities outside the state’s authority, warning of the risks of Hezbollah’s interference in Syria. This discussion took place during a closed Security Council session.

He also made clear that Hezbollah’s continued participation in the conflict in Syria carries a danger of intertwining Lebanon in regional conflicts and undermining the stability of country and region.

These statements were welcomed by the Lebanese opposition, who seek to implement the decision to disarm Hezbollah. The opposition stressed that Hezbollah – the de facto party in control of the government – retaining its arms would constitute an impediment to obtaining international aid or the success of negotiations with the International Monetary Fund (IMF), according to what was stipulated in the government's economic plan.

A "Meeting of the Republic" headed by former Lebanese President Michel Suleiman called for to examine Guterres' statement and implement the international resolutions.

In addition to the security escalation, Hezbollah is also facing a wave of popular rejection due to wrong policies that led Lebanon to its worsening economic crises. The hashtag "Nasrallah ruined the country" gained popularity on Twitter in Lebanon, where the social media users denounced Hezbollah’s role in spreading corruption and exacerbating the financial crisis.

The Twitter users launched an attack on Nasrallah and Hezbollah, explaining that the party serves Iran’s agendas and its expansionist project in the region, which has caused the destruction of Lebanon.

Activists blamed Hezbollah for causing the suffering of the people due to its irresponsible adventures in Lebanon, which recently included the smuggling of flour and fuel belonging to the Lebanese people to Syria. The terrorist party also caused a crisis in the price of the dollar against the Lebanese pound.

The activists called for the necessity for the Lebanese parliament to carry out its duties and hold Hezbollah accountable regarding the smuggling flour and fuel from Lebanon to Syria.

In this context, Dr. Tarek Fahmy, a professor of political science, explained to the Reference that the call to disband Hezbollah is a call repeated by the European Union to pressure the party, especially after Germany banned Hezbollah’s military and political arms. But this would be difficult to take place in Lebanon, since Hezbollah has a large representation in the Lebanese parliament and has sought to control the joints of the state, as it is one of the main actors on the Lebanese political map.

Fahmy added that Hezbollah cannot accept the prohibition of its weapons and will not respond to the popular pressure, because it considers its weapons a resistance directed against Israel and therefore will not give them up.

The call by the United Nations at this time is important, as the UN has a role to play in investing the presence of Hezbollah in Europe, especially since Hezbollah is present in multiple countries and carries out many illegal activities.