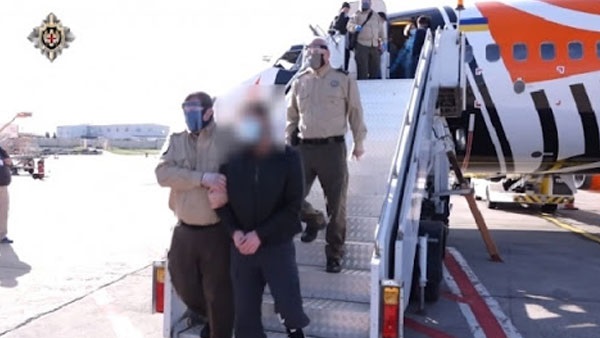 ISIS has recently received a severe blow, as many of its leaders are being brought to justice for crimes committed against civilians, which are classified as war crimes and genocide.

Ukraine extradited ISIS leader Cesar Tukhashvili, known as Al-Bara Shishani, the deputy to late ISIS war minister Abu Omr Al-Shishani, who was killed in battles in the Iraqi city of Sharqat south of Mosul in July 2016, to be brought to trial for terrorist crimes he committed in the name of ISIS.

After Al-Bara Shishani was arrested on November 15, 2019 near his house in a suburb of the Ukrainian capital Kiev with the help of US CIA intelligence, after he used a fake passport to enter the country illegally in 2018 following the defeat that ISIS suffered in Syria and Iraq at the time.

On Monday evening, May 18, after more than six months of detention in Ukraine, the Security Service of Ukraine (SBU) extradited Shishani to his native country, Georgia, where he was handed over to Georgian law enforcement agencies. He will be brought to trial in Georgia and held accountable for the crimes he committed in the name of ISIS in Syria while he was the emir of Latakia and Abu Omar al-Shishani’s deputy.

The Ukrainian police had said in a statement upon his arrest that Shishani was a prominent figure within the ISIS terrorist organization and was being held in detention while the SBU checked information about his possible involvement in crimes in Ukraine.

After joining the ranks of ISIS in the western Syrian suburb of Latakia, Al-Bara Shishani assumed a leadership position and was appointed as the emir in Latakia governorate by late ISIS leader Abu Bakr al-Baghdadi in 2013. After that, he was promoted by Abu Omar al-Shishani to higher positions within the organization, and he became the deputy minister of war since they were both from the mountainous Pankisi Valley in Georgia. As he rose within ISIS, he became one of the most wanted terrorists by the United States, which offered a reward of up to $5 million for information that would help remove him from the battlefield.

After Abu Omar al-Shishani was killed, Al-Bara Shishani crossed the border into Turkey and then went to Ukraine in the summer of 2018 using forged documents. He remained in contact with ISIS elements and planned to implement terrorist operations in Europe, and then he was to return again to the battlefield in Syria and Iraq, according to Ukrainian security.

On Friday, November 15, 2019, Ukraine’s SBU, in cooperation with US intelligence, arrested Shishani near his house in a suburb of Kiev.