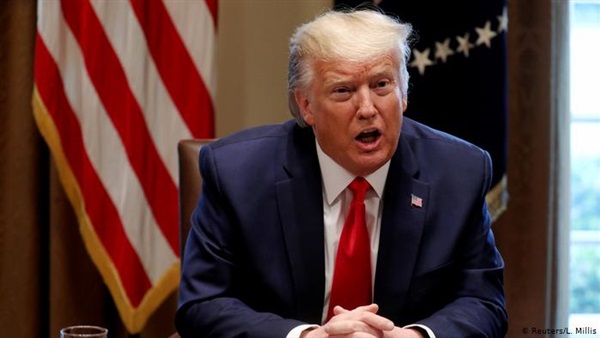 Donald Trump abruptly halted a press conference on Monday after being challenged by an Asian American reporter whom he told: “Don’t ask me. Ask China.”

With the stars and stripes at his back, Trump held his first press briefing since 27 April in the White House rose garden, flanked by testing equipment and swabs and signs that proclaimed: “America leads the world in testing.”

But during a question and answer session, Weijia Jiang, White House correspondent of CBS News, asked why the president constantly emphasises that the US is doing better than any other country when it comes to testing.

“Why does that matter?” she queried. “Why is this a global competition to you if every day Americans are still losing their lives and we are still seeing more cases every day?”

The president then called on another reporter, Kaitlan Collins of CNN, but she paused as Jiang interjected: “Sir, why are you saying that to me, specifically?”

The president replied: “I am not saying it specifically to anybody. I am saying it to anybody who would ask a nasty question like that.”

The CBS correspondent pointed out: “That is not a nasty question.”

Collins, at the microphone, then tried to ask her question, but Trump said he was now looking to someone at the back. As Collins repeatedly objected, the president turned on his heel and left the podium.

Trump has frequently been criticised for adopting a particularly harsh or patronising tone at press conferences to women in general and women of colour in particular. Jiang was born in China but immigrated to America at the age of two.

Democratic Congressman Ted Lieu of California tweeted: “Dear @realDonaldTrump: Asian Americans are Americans. Some of us served on active duty in the U.S. military. Some are on the frontlines fighting this pandemic as paramedics and health care workers. Some are reporters like @weijia. Stop dividing our nation.”

Earlier at the briefing, Trump claimed that the US’s testing capacity is “unmatched and unrivalled anywhere in the world, and it’s not even close”. More than 9m tests have now been performed, he said, and where three weeks ago roughly 150,000 per day were done, the total is now 300,000 per day and will go up.

Trump said this week the US will pass 10m tests, nearly double the number of any country and more per capita than South Korea, the UK, France, Japan, Sweden, Finland and many others. But critics point out that South Korea implemented its testing much quicker, flattening the curve of cases so fewer tests were required.

The president announced his administration is sending $11bn to states, territories and tribes to boost testing. He described it as an effort to “back up” states but did not unveil the national testing strategy that many experts have called for.

Trump also claimed without basis that “if somebody wants to be tested right now, they’ll be able to be tested”, echoing a spurious claim he made way back on 6 March.

“In every generation, through every challenge and hardship and danger, America has risen to the task,” he said. “We have met the moment and we have prevailed.”

Trump, who has been encouraging states to reopen, promised: “We will defeat this horrible enemy, we will revive our economy and we will transition into greatness. That’s a phrase you’re gonna hear a lot.”

Democrats expressed scepticism. Daniel Wessel, Democratic National Committee deputy war room director, said: “Trump says we ‘prevailed’ on testing, but his response has been a complete failure and made this crisis worse than it needed to be.

“Trump still hasn’t helped states reach the testing capacity they need, every American who wants a test can’t get a test, and he is only now taking steps that should’ve happened weeks ago. While Trump wants to declare mission accomplished, the American people are still suffering and will not forget how he gave up on them.”

The campaign group Protect Our Care noted that it was 13 days since Trump said the US will run 5m daily tests “very soon”. Zac Petkanas, director of its coronavirus war room, recalled that Trump promised that anyone who wants a test could get a test and that the US would soon be testing 5m Americans per day.

“This wasn’t true when he said it and it’s not true today. What is true is that more than 80,000 Americans have lost their lives in large part because Donald Trump still hasn’t taken testing seriously. The only thing that the president has prevailed at is making America first in reported deaths and infections.”

The White House itself is not immune from coronavirus. Katie Miller, the press secretary for vice-president Mike Pence, and a personal valet who works for Trump both tested positive last week. Those entering the West Wing are now required to wear a mask or face covering, after a new memo was issued on Monday. Trump and Pence are being tested every day. Trump, however, is exempt from wearing a mask in the White House. It’s not clear if Pence will wear one or not.

The president said it is “shocking” how many people come in and out of the White House every day. “I’ve felt no vulnerability whatsoever,” he said.

During the press conference, Trump’s presidential election opponent, Joe Biden, tweeted: “Donald Trump and his team seem to understand how critical testing is to their own safety. So why are they insisting that it’s unnecessary for the American people?”