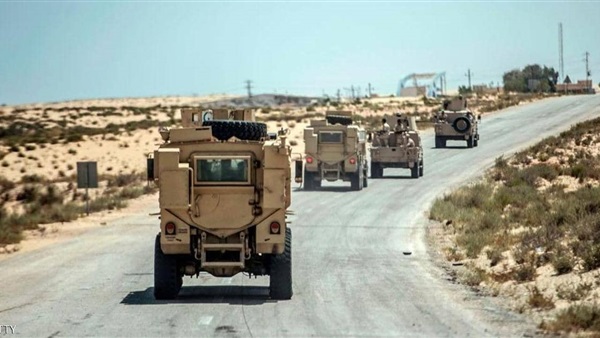 It is not possible to separate Bir al-Abd attack in north Sinai and the general scene of the movements of terrorist groups in the local and regional surrounding of the intelligence services Supporting terrorism, especially Turkey.

The operation came two weeks after the liquidation of the Amiriya terrorist cell, which was planning to carry out a number of terrorist operations outside Sinai, especially in Cairo Governorate.

The operation also came in light of Egypt’s celebrations of the Sinai feasts and the completion of a number One of the giant economic projects for the development of Sinai.

As for the regional environment, it is represented in Egypt's support for efforts to unify Libyan lands and eliminate armed militias backed by Turkey, as well as Egypt's efforts to confront terrorism in Sudan, and this introduction is a key to solving the mysteries of this process at this time

Experts concur that there are great attempts to occupy the Egyptian reality with internal terrorist operations to isolate it from its regional environment, especially in Sudan and Libya, which are witnessing a desperate conflict from the main supporter of terrorism in both Ankara and Doha.

In this context, Hisham Al-Najjar, a researcher who specializes in the affairs of terrorist groups, says that Egypt considers a block-wall against Turkey to support terrorist groups, and therefore the Turkish regime seeks to put Egypt a way.

Al-Najjar indicated that Egypt started working on creating unified Arab intelligence moves to repel the Turkish invasion project and its armed militias from controlling the Libyan arena, by establishing a unified Arab front and creating a joint program of action to confront the Turkish axis. There is no doubt that Turkish intelligence reads these moves, and therefore It seeks to relieve Egyptian pressure in this region, by increasing terrorist operations in the Sinai and trying to create security in other governorates and Cairo, to distract it in internal crises.

Al-Najjar adds that the geographical distribution of terrorist groups in Egypt currently places ISIS, which has become at its weakest at the top of the country's terrorist triangle represented by the Brotherhood and its armed arms as a decisive brigade and the brigade, and the two base and recent poles were spreading their activities in the provinces, but they witnessed an urgent weakness after the success of the security services It also undermined their activities, and it also succeeded in stopping al-Qaeda activity on the Libyan front after striking the Hisham Ashmawi structure, in addition to directing strikes at the ISIS organizational structure in the Sinai, but ISIS is trying to balance the tripartite equation that has lost two basic sides. Behold, he lost his balance in the provinces, trying to show his nails sometimes in areas that were considered hotbeds of the Brotherhood and the Arctic, including the princely area, which saw the elimination of a terrorist cell in the fourteenth of April 2020.

On the other hand, carrying out specific operations in Sinai, with the aim of confusing the Egyptian security services, operating them locally, and stopping their successes on the regional scene

The latest operation cannot be read in isolation from the state’s efforts to develop the Sinai Peninsula, which coincides with Egypt’s celebrations to liberate the Sinai, including giant projects that Egypt has completed during the past period, the last of which was the presence of President Sisi of the completion activities of digging the tunnel «Martyr Ahmed Hamdi 2 »This kind of operation seeks to influence the local economy, which is beginning to show great progress on many levels, and the threat of investment in the Sinai Peninsula, which the state and security services have been able to purge from terrorism and besieg it in a very narrow focus in the far northeast of the Rafah region .

Public discontent and a promise of revenge

The recent operation in Bir al-Abd showed a state of public discontent in the Egyptian street over terrorist groups, especially that the operation came at the time of breaking the fast in the month of Ramadan, which brought back to the memory the similar operations that took place in the Sinai during the same time in previous years that took place with the Brotherhood’s blessing in August 2012 , Which killed 16 officers and soldiers while eating breakfast near the Kerem Shalom crossing in Rafah.

In a statement issued on Thursday, April 30, 2020, the Egyptian armed forces vowed to avenge the perpetrators of the Bir al-Abd operation, and the continuation of their hostilities against terrorist elements to maintain the security and stability of the homeland.