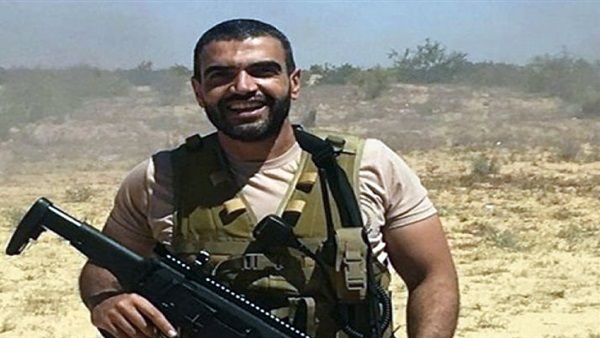 The life of a brave hero who sacrificed his life in order to protect his homeland and his soldiers from the brutality of ISIS is being portrayed in the Egyptian drama series “El-Ekhteyar” (The Choice), starring Amir Karara, who plays the role of Colonel Ahmed Saber Mansi.

The martyr Ahmed Saber Mansi was born in 1977 in Minya al-Qamh, Sharqeya governorate, northeast of Cairo. He graduated from the Military Academy and then worked as an officer in the Thunderbolt Forces.

Mansi had served for a long time in the Special Forces Task Force Unit 999, which is the most powerful unit in Egypt’s Thunderbolt Forces. In 2001, he joined the first expeditionary special forces SEAL team and then traveled to the United States for training in 2006.

Mansi obtained a master’s degree in military science from the Command and Staff College, and he took over as commander of the 103rd Sa’ka (Thunderbolt) Forces Battalion in Sinai after the martyrdom of the battalion’s former commander, Colonel Rami Hassanein, in October 2016.

In July 2017, the martyr Mansi was carrying out an operation to combat terrorist and takfirist activity in the Egyptian cities of Rafah and Sheikh Zuweid. At dawn on July 7, the area of Burth Square was ambushed and a car bomb detonated.

Mansi and his men did not hesitate to defend the land, and they confronted the takfirist elements valiantly. However, the car bomb was heavily laden and exploded near Burth Square. Then a number of four-wheel drive vehicles came loaded with dozens of terrorists, completely surrounding the security outpost, and they clashed with the Egyptian forces.

Nevertheless, Mansi did not surrender. In his last words during the saga, he told his colleagues in a strong voice that he would not be broken.

“It could be my last moment in the world. We are being attacked in Burth by a group of ISIS takfirists. They entered with a number of car bombs… I and four soldiers are still alive, still holding onto the land for the sake of our martyred colleagues, whom we will not leave. And we will not leave any wounded, and we will not leave this land with any martyrs or wounded. We will obtain their rights or we will die like them,” Mansi said.

These were not just words uttered by Colonel Ahmed Saber Mansi. Rather, they came from a truthful heart, and he did not retreat from defending his land and the soldiers he led. Instead, he continued to fight from the roof of the besieged building and fired at terrorist elements to defend his station until a 54-mm caliber bullet meant for light-armored vehicles took his life as he moved positions. The “Legendary Mansi” was martyred on July 7, 2017.