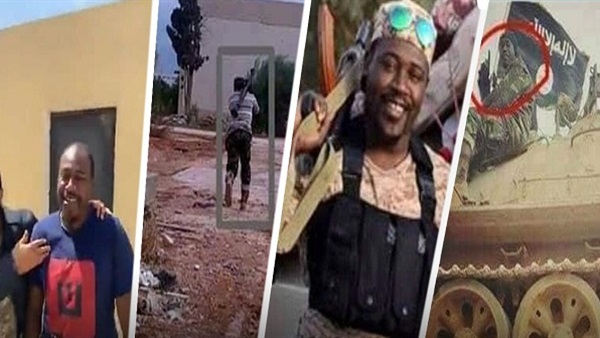 Libya’s Al-Wefaq government has been involved in recruiting armed militias and terrorists to carry out military operations against the National Army of Libya, Akhbar Libya newspaper has reported, and one of those terrorist elements is Faraj Shako.

Faraj Shako, or Faraj Moussa Al-Hesnawy, one of the most wanted men on the terror lists, has previously participated in fierce battles against the Libyan National Army forces in Benghazi, and he appeared once, raising the black flag of Daesh above a tank.

During Operation Dignity in 2015, Shako appeared holding an RPG-7 rocket launcher during an attack against a military camp.

In May, Haftar began a combined air and ground assault against the pro-Islamic militias of Benghazi, as well as a sustained heavy weapons attack against

Shako first appeared when he announced joining the protests against former president Muammar al-Gaddafi, shortly after, his true extremist ideology and relation to terrorist organizations were exposed.

He was also the spokesperson for the so-called Shura Council of Benghazi Revolutionaries. He also fled Benghazi to join Al-Wefaq government’s militias in battles against the Libya’s National Army in Tripoli.

In December 2016, conflicting reports were received about the arrest of Shako, after a Libyan army pursuit operation against the defense companies of Benghazi in the vicinity of Bin Jawad, but reappeared again normally.

In October 2019, Shako was injured in clashes against the national army, in the Ramla axis, south of Tripoli, as he was fighting in the ranks of the Juwaili militias, and was transferred to the clinic of Al-Masarra.

In 2017, the Libyan National Defense and Security Committee announced a statement in which it disclosed a list of the names of 75 people and nine entities, designated by the government of Tripoli as terrorists. These names were associated with the Qatar, and among those names was Shako.

In 2018, it was reported that the terrorist that Shako was killed in the city of Misrata, as a result of an airstrike by the Libyan National Army forces in the Oil Crescent region.

In 2018, he was accused for the attack against United States intelligence and diplomatic buildings in September 2012, killing Ambassador J. Christopher Stevens and three members of his staff in an assault that upended the city’s fragile power structure.