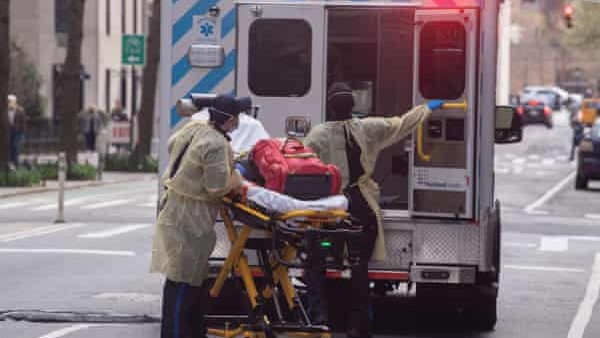 The Austrian government, which has introduced some of the strictest lockdown rules in Europe, has announced that it is preparing to relax them, giving an insight into what it’s calling its ‘exit strategy’, writes Kate Connolly in Berlin.

But said Chancellor Sebastian Kurz, it will depend on citizens sticking to the existing rules, and people’s behaviour this week as well as the infection rate, will be “decisive” in seeing how the country proceeds.

“We are trying to carefully shape a plan as to how we can proceed after Easter,” Kurz said in a press briefing in Vienna this morning.

From 14 April small shops (400 m2 or less in size) as well as DIY stores will be allowed to reopen, as well as state parks, but only with tight entry controls.

However curfews will remain in place and the obligatory wearing of face masks or mouth and nose covering – until now intended for shoppers in supermarkets - will be extended to public transport.

“Easter week will be a decisive week for us. It will decide whether or not we will rise again after Easter,” Kurz said, referring to the resurrection of Jesus which is the culmination of the Easter feast, which is widely celebrated in the overwhelmingly Catholic country.

From 1 May, all shops, shopping centres and hairdressers will be allowed to open. Restaurants, hotels and bars will remain closed until further notice. When they do reopen again, staff will have to wear masks and tables will have to have a specific distance from each other.

Austria’s leaving certificate, the equivalent of the A-level exams in the UK is due to take place, with schools reopening at the start of May for those pupils. Other pupils will return to school from the middle of May. Universities will have to complete their semesters via video learning, Kurz said.

The Austrian exit strategy will also include the introduction of tracking apps to trace citizens’ movements and ensure they are not breaking curfew rules. They should be used by the whole of the country. Those who don’t have a mobile phone will be required to wear a special key-ring style device, the chancellor said at the weekend. The majority of Austrians are said to be in favour of the measures.

In Germany, the Robert Koch is developing a similar app to that due to be introduced in Austria. It is being developed in conjunction with a European app which 130 researchers are currently developing, and will warn people if they might have had contact with infected persons. Its use is expected to be anonymous and voluntary, although surveys show a large number of Germans are prepared to use it if it leads to a relaxation of lockdown rules. The ultimate aim should be to have a single, Europe-wide tracking app.

“Its use should be voluntary, but obviously with the hope that as many people as possible will use it,” Steffen Seibert, spokesman for the German government said this afternoon. “People who use it will be doing their significant bit to reduce the spread of the infection and helping measures to fight it.”

Eugen Tomac, a Romanian MEP, has tabled a written question in the European parliament asking what measures the European commission intends to take to forestall the spread of Covid-19 among refugees in the Greek islands.

Fears are growing that the conditions in which refugees are living on Europe’s borders are ripe for the spread of pandemic disease. Below I reported how two Cyprus-based NGOs had accused that country’s government of turning one migrant centre in to an effective prison camp, with inadequate provision for hygiene and social distancing to protect the health of residents and staff.

The text of Tomac’s question, posted on the European parliament website, reads:

The COVID-19 pandemic currently constitutes a huge challenge for the EU, and is a very good test of solidarity, as well of the respect for human dignity and rights. As the EU’s fight to contain the virus continues, nearly 42 000 asylum seekers are living in squalid conditions in hotspots on the Greek islands. This is likely to lead to an outbreak. Hence, can the Commission answer the following questions:

How does it intend to ensure the right to health in the refugee camps is respected?

What measures have been taken to prevent a COVID-19 outbreak within the overcrowded camps?

Is there a sufficient number of qualified medical personnel to cope with a possible spread of COVID-19 within hotspots, and where will those who test positive be treated?