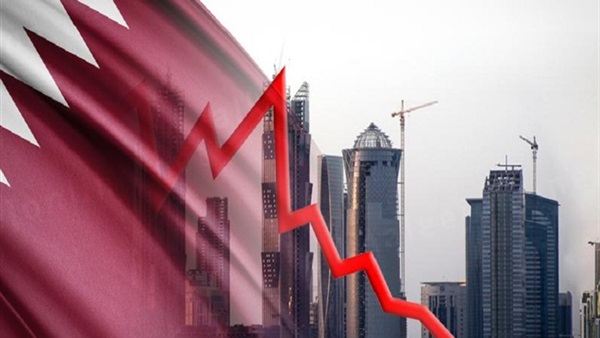 The Qatari regime, which carried out uncalculated adventures of supporting terrorism and sponsoring the Muslim Brotherhood organization, is now suffering full collapses in the real estate sector that reached more than 30% in losses on a monthly basis and 16% on a yearly basis, not to mention acute losses in the local stock exchange.

A report by Fitch Ratings has said the spread of the corona virus will pressure Qatari banks' asset quality and funding volatility could recur.

The report also forecast Qatar's real GDP growth at minus 2% in 2020, after an estimated 0.6% positive growth last year.

This collapse was reflected in Qatar's ability to control the consequences of the spread of the virus, which led to the regime's inability to deal with internal situations such the stranded foreign and Arab citizens in the country.

Moreover, a report by Amnesty International has said as the world struggles to contain the spread of the COVID-19 pandemic, migrant workers trapped in camps such as those in Qatar are at particular risk of exposure to the virus.

The report affirmed Qatar’s violations to instructions by the World Health Organization in dealing with the infected, which further led to the spread of the virus across the country with 693 confirmed cases until April 1.

Qatar Airways, one of the top Middle Eastern carriers, said there was a temporary reduction of 40 percent of staff at Hamad International Airport due to the coronavirus pandemic, a company spokesman has told Bloomberg.

Reductions occurred across various areas including food and beverage, retail and ground staff, the spokesman said.

Also, Chief Executive Akbar al-Baker has told Reuters Qatar Airways will continue to operate flights as long as necessary to get stranded travelers home, but warned that the carrier could soon run out of cash.

“We have enough cash to take us through a very short period of time,” he said in a phone interview.

He said the airline would eventually have to seek support from its owner, the Qatar government.

A recent crisis between Qatar and Bahrain regarding stranded Bahraini citizens in Qatar has exposed the impact of the economic situation on airports, and weak health care precautions

Doha said it flew 31 Bahrainis stranded in Iran into the country on a state-run Qatar Airways flight on Saturday.

Bahrain has said it had its own repatriation flights scheduled for those stuck in Iran, and that Tehran’s move to place its citizens on a commercial flight put them at risk and exposes others to getting the disease.

Bahrain has also demanded Qatar stop meddling in its plan to repatriate its citizens stranded abroad due to the global coronavirus pandemic.

Bahrain has accused it of operating flights that do not comply with the anti-virus hygenic rules.

Bahraini Royal Court Minister, Shaikh Khalid bin Ahmed has also tweeted that the procedures taken by Qatar in fact put travelers and flight crews in extreme danger and without any prior coordination with the Bahraini authorities.