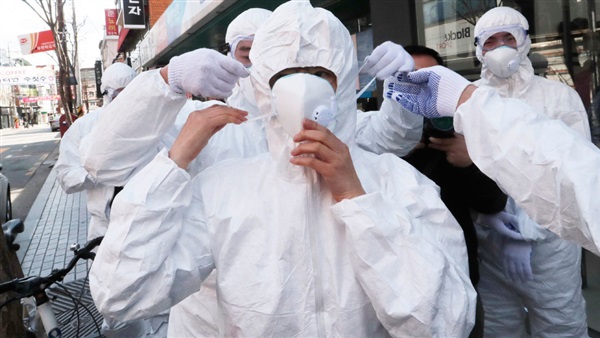 The head of Germany’s leading public health body, said it is still “too early” to say whether physical distancing measures are having an effect in the country, Kate Connolly reports from Berlin.

Lothar Wieler, president of the Robert Koch Institute, said he had hoped that by today it might have been possible to see if the measures had led to a fall in infections.

As to why there is a relatively low death rate in Germany (officially 146 deaths, and over 31,500 infections, according to RKI figures), Wieler said it was due to the fact Germany had tested widely from the start, and was able to detect the virus earlier, and many milder cases were discovered.

In addition as yet, fewer older people in Germany have been infected, he said.

Wieler said “we are at the beginning of this epidemic” and the number of deaths would rise. “It is still completely unclear how this epidemic will develop,” he said.

As well as general UK coronavirus news lines they will be covering evidence from Prof Neil Ferguson, director of the MRC Centre for Global Infectious Disease Analysis at Imperial College, to the Commons science committee about coronavirus at 10.15am, Prime Ministers’ Questions at 12pm, and the resumption of the debate in the Lords on the draconian coronavirus bill at 3.30pm.

Ireland has changed the criteria for testing for coronavirus to prioritise people that show two symptoms rather than just one, Rory Carroll reports from Dublin.

The National Public Health Emergency Team announced late on Tuesday that people must show fever and at least one sign of respiratory disease, such as coughing or shortness of breath, before being referred for testing.

The change is a response to a backlog of 40,000 cases awaiting testing, and an additional 20,000 people per day seeking testing, which has “cast the net too widely”.

The chief medical officer, Tony Holohan, said this had led to inappropriate testing and the goal now was to focus on people in hospital, healthcare workers and other priority categories.

On Tuesday the taoiseach, Leo Varadkar, announced fresh restrictions – all non-essential shops to close, all sport events cancelled, no outdoor gatherings of more than four people – that came into effect at midnight.

Sadiq Khan, the mayor of London, has warned that more tube services in the UK capital may have to be cut because of staff sickness rates approaching 30%, Rowena Mason, deputy political editor, reports. He said the highly trained staff could not be replaced and repeated calls for the government to forcibly shut construction sites.

The government has been under pressure over the conditions of construction workers packing on to crowded public transport and gathering together on sites and in canteens, failing to heed social distancing rules. But Robert Jenrick, the communities secretary insisted that sites could remain open where social distancing is observed and claimed it was essential for infrastructure works to continue and dangerous cladding to be removed from buildings.

Those sites that cannot operate within the rules should shut immediately, he said in a round of broadcast interviews.

There will be construction sites where following the government guidelines is possible. Where it isn’t possible they shouldn’t operating.

He also released revised guidance on exactly which premises can remain open, which specifies that shops can only allow in small numbers of people at a time and must operate outside queuing systems with distancing measures.

It clarifies that tradespeople can carry out work in people’s homes as long as they are well, they observe social distancing and are not working for people being shielded unless in an emergency.

European Union leaders are to call for “a true European crisis management centre”, according to a leaked document that seeks to draw lessons from the coronavirus pandemic, Jennifer Rankin reports from Brussels.

The EU’s 27 leaders will hold a conference call on Thursday, replacing the spring summit that was due to take place in Brussels, which is usually devoted to the economy. Instead the agenda will be dominated by coronavirus, the impact on people, health systems and the economy.

According to a text of the EU conclusions seen by the Guardian, EU leaders are expected to sign off on “a more ambitious and wide-ranging crisis management system within the EU, including, for instance a true European crisis management centre”.

The EU already has an Emergency Response Coordination Centre, which operates 24/7 and can organise help, if asked, when any country in the world suffers an earthquake, forest fire, floods or pandemic.

The text also makes a muted plea for the lifting of export bans on medical protective kits, such as masks and goggles. Germany and France have been criticised in recent weeks for imposing export bans on some of these products. The text states that a recent decision requiring all countries to seek approval for export of these goods outside the EU “should lead to the full lifting of any internal bans”, but stops short of member states pledging to do so.

EU leaders will also pledge to ensure “smooth border management” for people and goods, amid rising concern that internal border controls are slowing the supply of vital medical goods. As of 24 March at midday CET, 12 countries in the European border-free travel zone had told authorities in Brussels they had introduced border restrictions.

Manufacturers are warning that vital supplies, such as masks and surgical equipment, are not getting through.