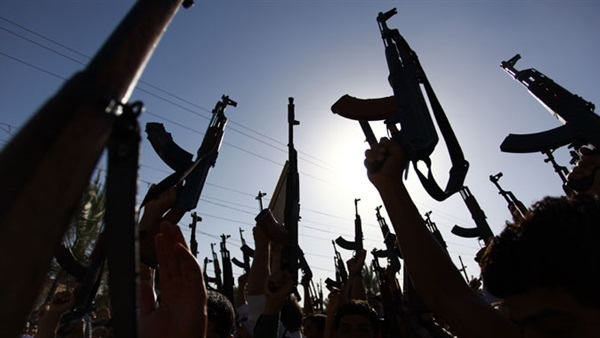 "The pressures Egypt’s national security sustained in the past few years, especially after the country’s two revolutions, were unprecedented”.

Severe structural imbalances in the state and society – which still maintain their effects – led to the eruption of the January 25 revolution in 2011. Problems persisted in the years that followed the revolution, leading to yet another uprising on June 30, 2013. This has opened the door for varied reactions that resulted in threats.

There are different estimates of the impact these threats will have on Egypt's national security and future stability.

Egypt’s national security faces a series of complicated threats. The growing role of terrorist groups in the Nile Valley and Delta is the first of these threats.

The growing role of terrorist groups has a direct impact on the structure of the state. This requires discussion and analysis as well as an attempt to define their main patterns with the utmost accuracy in order to define the characteristics; patterns; strength, and continuity of terrorist groups. This is the way to make sense of unconventional ideas.

In order to understand the nature of this phenomenon, the first aspect of the analysis will focus on monitoring the organizational structure of these groups as well as their most important operations.

There are two types of terrorist organizations in Egypt: first, traditional organizations, such as Ansar Bait al-Maqdis. Second, there are untraditional organizations, or more specifically, the ones that emerged after the dispersal of the Rabaa al-Adawiya sit-in. In January 2015, one of the branches of the Muslim Brotherhood issued a document titled "Revolutionary Movements". The document talks about the importance of armed struggle against Egyptian authorities. The document opened the door for the formation of the so-called Administrative Committee which was headed by Mohammed Kamal, a senior Muslim Brotherhood figure who was killed in 2016. The committee formed some militant movements, including the Revolutionary Brigade, Hasm, and the Revolutionary Punishment.

In the last seven years, Egypt’s political environment underwent violent change. This change was associated with political and security developments in other countries of the region. These developments were precipitated by the Arab Spring.

Groups active in the Nile Valley and Delta had a variety of targets. The environment in which these groups operated was polarizing. There was also a lack of information on the names of these organizations. All these considerations make these organizations Egypt’s prime threat.

All the untraditional terrorist organizations that emerged following the ouster of Muslim Brotherhood president Mohamed Morsi in July 2013 have two things in common: the reasons behind their appearance and their organizational structure.

The organizational structure of these organizations is based on seven horizontal levels. Each of these levels has a set of powers and specific roles. The levels are made up of the following:

Training Group: The group that trains new individuals in the use of tools and equipment used in terrorist operations.

Manufacturing Group: The group that manufactures tools used in terrorist operations, such as improvised explosive devices and booby traps.

Housing Group: The group that provides hiding places for members of the organization before and after each operation.

Camouflage Group: The group that formulates camouflage plans for the protection of organization members before, during, and after terrorist operations.

Subversion Group: The group that carries out sabotage operations against public facilities and infrastructure, including electricity and water plants, police vehicles, and public transport.

Central Operations Group: This is the group that masterminds terrorist attacks, which is why it is the most important of all groups. It coordinates the work of all groups within the organization. It includes a number of rooms, each of which has three units.

As a movement, Revolutionary Punishment was promulgated in January 2015. It employs violent techniques against state institutions.

The emergence of Revolutionary Punishment was accompanied by a terrorist operation a highway in Cairo. The operation, which took place on January 24, 2015, left a policeman injured.

This is one of the most random terrorist organizations in Egypt. In 2015, the organization carried out 131 attacks. Revolutionary Punishment staged the largest number of attacks in March 2015, 30 attacks in all. In January 2016, the organization succeeded in staging two attacks only, thanks to the success of Egyptian security agencies in foiling attacks and arresting organization members.

Improvised explosive devices were the first tool to be used by Revolutionary Punishment in its operations. Organization members then reverted to firearm use. They then started dependence on bombs.

The organization also employed traditional techniques in its attacks, including the use of firearms in shooting and killing policemen.

Group members used firearms in as many as 50 attacks on policemen.

The group members also used improvised explosive devices in as many as 81 attacks. Explosive device use by the organization was at its highest between March and April 2015.

The organization used bombs in four attacks over a year and half.

Around 83% of the operations of the group targeted policemen. Army troops and personnel were the target of 7% of the attacks of the group.

The organization launched attacks in 17 provinces. Most of the attacks, 48, took place in Fayoum province. The northern coastal province of Alexandria came in second position with 18 attacks. The Nile Delta province of Kafr El-Sheikh came in the last position.

The terrorist movement, Hasm, is the most prominent among Muslim Brotherhood-affiliated terrorist groups. It emerged in June 2016 and declared the Egyptian state its avowed enemy.

Hasm invited attention to its birth on July 16, 2016 by a senior security official, namely the head of the State Security Investigation Section Mahmoud Abdel Hamid, in Fayoum province. Abdel Hamid was killed in the attack and two of his companions injured.

Hasm staged three attacks during September 2016. The number of attacks dropped remarkably then in October and November of the same year with one operation in each of these two months. The group then staged two attacks in December.

Nine people were killed and 13 others injured as a result of Hamas's attacks. The group used explosive devices in its eight operations. On December 9, 2016 Hasm staged its largest attack. The group targeted policemen near the Giza pyramids, leaving two officers and one police conscript dead and three other conscripts injured.

The group hit next, exactly in September 2016, near the Police Club in the northern coastal province of Damietta.

Around 35% of Hamas's attacks were staged in Giza province, whereas 21% of these attacks took place in Cairo. The provinces of Fayoum; Beni Sueif; Damietta, and Beheira shared the remaining number of attacks, with each of them receiving 11% of these attacks.

Lewaa al-Thawra appeared in August 2016. On August 21, 2016, the group ambushed two policemen in Menoufiya province and killed them. Three other policemen and two civilians were injured in the same attack.

Hasm's most senior victim was lieutenant general Adel Ragaie, the commander of the 9th Division of the Central Military Region. The group shot Ragaie and killed him as he got out of his home. It carried out the operation in retaliation for the killing of senior Muslim Brotherhood figure Mohamed Kamal, a few days earlier.

Untraditional terrorist organizations lost much of their operational capabilities in the Nile Valley and Delta during 2017.

In mid-2017, a policeman was targeted on a highway in southern Cairo. But this was almost the last attack by untraditional terrorist groups.

As a result of the attack, security agencies staged a series of raids on terrorist hideouts which dealt irreversible blows to untraditional terrorist groups.

Amr El-Deeb, a Muslim Brotherhood member, was one of many movement members who joined Daesh in Sinai. Members of the Helwan Brigades organization formed Ansar Islam.