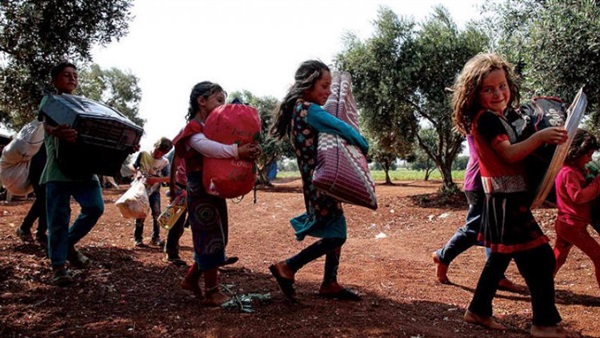 Government forces and their allies must allow humanitarian corridors into conflict areas in northwest Syria, the U.N. human rights chief said Tuesday, adding it was “cruel beyond belief” that civilians live under plastic sheeting in freezing conditions while getting bombed.

Michelle Bachelet’s comments came a day after Syrian President Bashar Assad pledged to press ahead with a military campaign in the northwest. His troops have been making rapid advances against rebel-held areas, sending hundreds of thousands of people fleeing for safer areas. Assad congratulated his forces for the gains, vowing complete victory “sooner or later.”

More than 900,000 people have been displaced from their homes since the beginning of December, according to the U.N. Those include some half a million children, according to Henrietta Fore, executive director of the U.N.’s children’s agency, UNICEF.

“Entire families, some who have fled from one corner of Syria to the other over the course of the past decade, are tragically finding that bombs are part of their everyday life,” said Bachelet. “How can anyone justify carrying out such indiscriminate and inhumane attacks?”

Bachelet urgently called on all parties to the Syrian conflict, including state and non-state actors, to immediately cease hostilities and ensure the protection of all civilians. The U.N. Human Rights Office recorded 298 civilian deaths in Idlib and Aleppo, where the government offensive has been concentrated, since Jan. 1.

It said 93 percent of those deaths were caused by the Syrian government and its allies. In addition, 10 medical facilities and 19 educational facilities were either directly hit or affected by strikes close by, the U.N. office said.

Syrian opposition activists reported airstrikes on several rebel-held areas on Tuesday, including the outskirts of the town of Atareb and Daret Azzeh.

“No shelter is now safe,” said Bachelet. “And as the government offensive continues and people are forced into smaller and smaller pockets, I fear even more people will be killed.”

She said displacement camps are overwhelmed by the sheer number of people seeking shelter, and there is limited access to food, clean water and medical care. Many fearing for their lives have fled the camps, braving harsh weather conditions and subzero temperatures, and taken their chances on the road.

Bachelet called on the Syrian government and its allies to allow humanitarian corridors into conflict areas, and to allow for the safe passage of civilians.

Fore, UNICEF’s chief, said “children and families are caught between the violence, the biting cold, the lack of food and the desperate living conditions. Such abject disregard for the safety and well-being of children and families is beyond the pale and must not go on.”