Psychological warfare between ISIS and the Iraqi forces 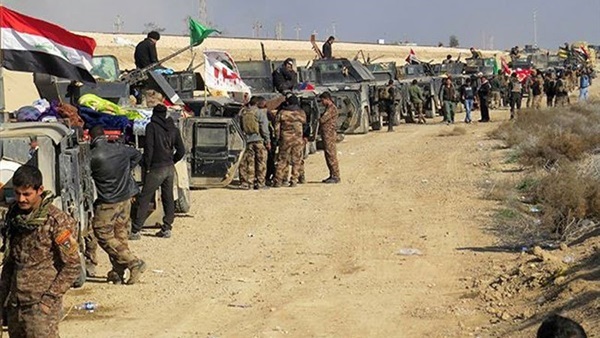 Wars do not depend entirely on military capabilities, as an army could possess superior weapons, ammunition and numbers but be defeated within battle due to a weak fighting doctrine.

Warring powers seek to wage psychological warfare against each other, which are defined as a set of media and diplomatic methods pursued by one party towards another with the aim of reducing the factors of business success, neutralizing or winning domestic support, and working to instill the spirit of defeat and weak morale.

Symbols, whether verbal, auditory, visual or cognitive, are used in psychological warfare, and they were even used in handwritten publications during the Middle Ages.

Psychological warfare then developed widely during the period between the two world wars and then the Cold War, taking many forms such as propaganda, rumors and political poisoning, in addition to brainwashing, terrorism and economic warfare. Traditional and digital propaganda methods have become very effective in modern wars.

In the modern era, psychological warfare is no longer limited to battles between countries but has extended to unconventional wars that take place between regular armies and terrorist organizations, for example the Battle of Mosul between Iraqi forces backed by the US-led international coalition and the ISIS terrorist organization.

Since the beginning of 2014, ISIS dominated large areas of Iraq and Syria, and it worked to establish a large media arsenal enabling it to promote its goals and operations inside Iraqi cities.

ISIS has committed horrific crimes against the security forces and civilians, which it photographed and filmed, and the media community in turn foolishly published ISIS’s crimes, slaughters and intimidation without realizing that this served as propaganda for ISIS.

ISIS relied on both emotional and mental grooming in its psychological warfare. In order to achieve this, ISIS used its media outlets to distribute CDs in the streets of Mosul and other cities. The CDs contained suicide operations and invited Muslims to follow their example.

The organization also utilized key words such as “immigration” and “join the organization”, as well as slogans with clear religious connotations, such as the testification of faith on its flag.

In doing so, ISIS attempted to win over viewers and influence them emotionally and psychologically in a way that leads them to leave their home countries and join the terrorist organization.

Modern digital methods have also been used by ISIS to attract and recruit young people, through social media sites, chat apps, and other similar sites. The cost of its producing propaganda on the internet is relatively low, and it is characterized by speed and flexibility.

The organization uses hashtags to spread its messages, and it has formed what is known as the "caliphate’s electronic army", which also hacks the accounts of important institutions.

It is clear that ISIS is exploiting all modern technological tools, aiming to easily communicate with the youth in the Arab world and around the globe.

Countries whose territories have fallen under ISIS control have sought to respond to the terrorist organization's methods, whether military or psychological, with the focus on psychological warfare primarily aimed at preserving the morale of the people and combat soldiers.

In the battle for Mosul, for example, the Iraqi forces relied mainly on flyers dropped from the air to citizens in the cities and governorates occupied by ISIS. The flyers focused mainly on national, security and religious issues, using classical Arabic combined with the Iraqi dialect in order to make them easier for all citizens to understand regardless of their level of education.

The Iraqi forces depended on emotional grooming by strengthening people’s relationships with each other and stating that ISIS will inevitably be purified from the cities, as well as rational grooming by disproving ISIS’s lies.

Iraqi flyers also played a prominent role in informing citizens of safe exit plans and how to use safety cards while traveling with security forces, all of which could not be communicated to the public in other ways.

It is therefore clear that the Iraqi battle against ISIS was not only in the military field but also extended to psychological warfare, and they each used the tools they excelled in, but the dominance on the military side was in favor of the Iraqi forces.