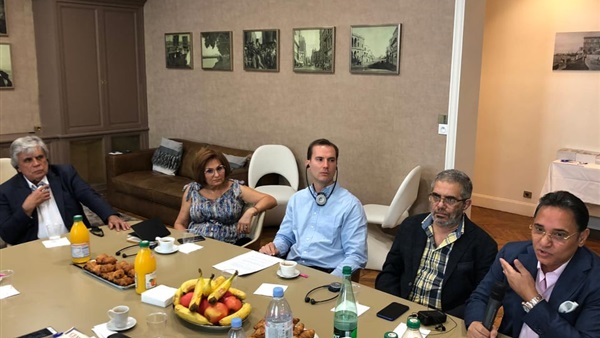 Director of the Center for Middle East Studies in Paris (CEMO) Abdel Rahim Ali said Saturday that cooperation, coordination and continual dialogue between the seven industrial nations, on one hand, and African and Asian states, on the other, on common issues and problems, including means of fighting terrorism, is extremely important at present.

He added at the monthly breakfast seminar of the center at its headquarters in the French capital that terrorists and their financiers have benefited a lot from political controversies and ideological differences between world and regional powers.

When Arab suffered from a surge in terrorist attacks in the 1980s and 1990s, mainly against the security establishment, tourist facilities and Christians, for example, Ali said, some European states, such as the UK, considered the same terrorists staging the attacks freedom fighters or "armed opposition".

"It also offered them the chance to gain political asylum status, allowed them to organize conferences, and organized hearing sessions for them at representative councils, including at the House of Commons," Ali added.

He noted that the same terrorists were allowed to be interviewed by newspapers and television stations to denigrate the faith of Arab governments that did not share the same ideological beliefs with them.

He expressed sorrow that some major media organizations, the BBC for example, continue to describe terrorists carrying out attacks against the Egyptian army and police in Sinai as "militants".

"Nevertheless, if someone stabs a British citizen or drives over a group of British citizens on one of the streets of London, this person will immediately be called a "terrorist" by the same media organizations, in a flagrant contradiction," Ali said.

"This contradiction is always used by terrorist groups in achieving their goals," he added.

He noted that some people call for suppressing women and spreading hatred against those who follow difference religious beliefs.

They, he dded, hold music and the arts in scorn and ban them on the grounds that they are against their religious beliefs.

"Some important writers and columnists consider the leaders of the International Organization of the Muslim Brotherhood and the organization which holds the same racists beliefs as "freedom fighters" as well," he said.

"They spread a welcome mat for them inside parliaments and rights centers so that they can explain and defend their views and beliefs," he added.

He called for unifying concepts between Europe and Africa. He said this is becoming very urgent so that both continents can prevent terrorists and racists from using contradictions in serving their own interests.

The seminar is organized on the sidelines of the G7 summit in Biarritz, a seaside town on the southwestern French Basque coast. Egyptian President Abdel Fattah al-Sisi is attending the summit for the first time.

Mariam Benrand, a political violence specialist at the Arab and Islamic World Research and Studies Institute of the French Ministry of Higher Education, participates in the seminar. .