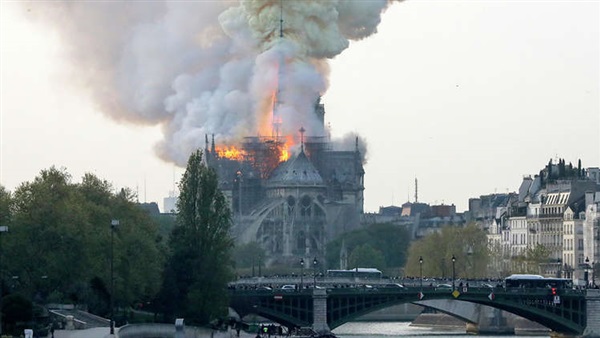 I wondered why I so full in love with the French soul!, I used to say that the common factors between the two French and Egyptian soul is that they both transit ages consistently whether rapidly or slowly in the meantime.

So, I see the fire that broke out at the Notre Dame Cathedral in Paris, just a purify-light come to rescue the lost French-spirit.

We have forgotten that the faith –whatever its origin- not a diabolical flower, but it is a creative hope for history. From this point of view, I prefer to be a friend for building worker more than to be a friend for one of worshipers who worship in a church or in a mosque. De Gaulle says: “Where hope ends, death begins”.

I grew up in a Muslim community in Alexandria. I’ve read the immortal novel “The Hunchback of Notre-Dame” of Victor Hugo.

When I became a writer, I longed to gather the Al-Azhar Mosque, which also dates back thousands of years with the Notre Dame Cathedral in one gallery. However, political events and fluctuations did not allow this.

Dr. Abdel Rahim Ali texted me from Cairo to inform me that, the Grand Imam of Al-Azhar, the world's largest Sunni institution, had sent an emotional message to the Christians. Perhaps we are holding the exhibition in the coming days in Cairo; it may be in the re-opening day of Notre Dame Cathedral.

We must be a precursor of hope as a salvation from annihilation.

For me as a Muslim, the fired-cathedral is the core of the ideals of Christianity. It is the greatest embodiment of the French civilization.

A few days before Easter, I am grateful for those fires that will revive the best of us, which will allow us to recognize how much we need to live together in peace. But is not abstract vision in itself a kind of loss of insight?