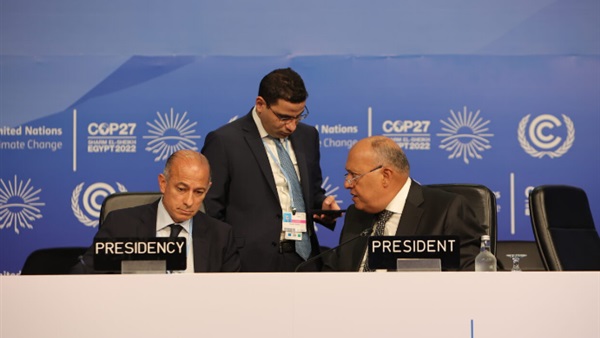 Egypt FM and COP President Sameh Shoukry convened today November 14th an Informal Stocktaking Plenary of COP27. During this session, which was timed for the half-way point of COP27, Shoukry urged Parties and Groups to focus on reaching a successful outcome. He reiterated the necessity for an outcome that is consistent of the implementing ethos of COP27 and to advance climate commitments.

“There is still a lot of work ahead of us if we are to achieve meaningful and tangible outcomes of which we can be proud.

Following consultation with the Parties and Groups involved in negotiations, the COP President set out a work program to deliver agreement in the COP27 negotiations.  This covered:

Continued technical negotiations across key issues under the governing bodies until end of Tuesday 15 November.

Continued Presidency consultations across all the issues under discussion

In his statement made at the Plenary, the COP President identified the technical co-facilitators who will be tasked with working together towards successful conclusions of agenda items carried over from subsidiary bodies’ meetings. This will include in, inter alia, mitigation, adaptation, loss and damage, agriculture, gender and response measures

The COP27 Presidency seems to see nearly all outstanding issues resolved by Wednesday (November 16) morning so a timely agreement can be achieved by the final day of the COP. To achieve this the COP President welcomed intensive engagement with all Parties, saying:

“I also wish to emphasize that the Presidency’s door, my door in particular, remains open to all Parties.

“Our common objective is to adopt consensus decisions and conclusions on Friday that will constitute comprehensive, ambitious and balanced outcomes of the Sharm el Sheikh conference.”