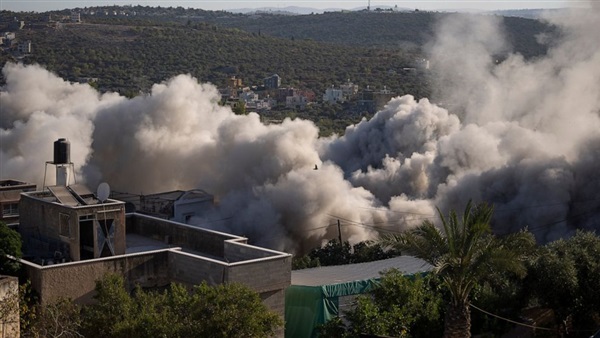 The Israeli military demolished the homes on Tuesday of two Palestinians suspected of killing an Israeli security guard in a West Bank settlement in April.

Smoke erupted from the site as the building came tumbling down in a controlled explosion. Palestinians clambered over the rubble after the soldiers left and pulled items from the ruins.

The security guard, Vyacheslav Golev, was killed in a shooting at the entrance to a Jewish settlement in the occupied West Bank on April 29. The Palestinian militant group Hamas claimed responsibility for the attack.

The Israeli military later apprehended two Palestinians suspected of carrying out the attack. On Tuesday, the army said it demolished their residences in the northern West Bank village of Qarawat Bani Hassan.

In a statement, the military said forces faced a violent protest, with firebombs and burning tires thrown at the troops.

Israel routinely demolishes the homes of slain or captured Palestinian assailants who killed Israelis, saying it serves as a deterrent against future attackers. The Palestinians and rights groups say the practice amounts to collective punishment.

Israeli troops have been carrying out near-daily raids across West Bank for months in the aftermath of a string of deadly attacks in which Palestinian attackers killed 19 Israelis.

The military has faced resistance during some of those raids, which in several instances have turned deadly. More than 60 Palestinians have been killed by Israeli forces since the start of the year, according to an official Palestinian tally.

The Palestinians seek the West Bank, the Gaza Strip and east Jerusalem, territories Israel captured in the 1967 Mideast war, for a future independent state.